Cosmetta is Rosalina's older sister and was estranged from her sister before she was even born. The two were eventually reunited thanks to the events of Super Mario Bros: Multiverse Degeneration. Unlike her sister, who watches over the universe and protects it, she has orders to destroy certain sections. Although the two have their arguments over this, it is generally agreed that she is right most of the time.

She lives at the Cosmic Lighthouse, a floating asteroid with a lighthouse on it. The beam on the lighthouse flashes red when it finds a planet that needs to be destroyed. Despite having this job, she is extremely bad at it, never learning how to use the Black Hole Gun properly and often misfires before hitting the planet she meant to. This implied to be the reason why black holes appear in Super Mario Galaxy and Super Mario Galaxy 2.

Cosmetta is far more energetic than her sister, often over confident in her own abilities to the point where even Waluigi and Wario think she is too self centered. Although she misses her mother, she never displays this sorrow to anyone beyond her sister. She likes to bite her fingers for some reason and usually has a couple teeth marks on her pointer finger.

She likes to joke around with others, which often doesn't go well with some people. Despite this, she has made quick friendships in her short time knowing the Mario circle. She tends to make friends with villains more often than not, which has made Mario very skeptical of her true intentions...

There is no question about her morality though, ultimately. She simply wants to have fun and reconnect with a world she thought forgot her. She makes mistakes and learns from them, and even with her mischevous personality she never wants to harm anybody.

Like her sister, she can protect herself in a bubble, although these have more averse effects. When Mario or Luigi attempt to jump on her, she will form a red bubble that takes away a hit point from them and then cover her mouth as if she didn't intend to do that. She can also levitate and fly like her sister and is often way more show-boaty about it. She has the ability to speak via telepathy as well. Unlike Rosalina, who is skilled with her wand, Cosmetta is terrible at aiming and using her Black Hole Gun.

Appears as a Mystery Costume.

Appears as a Mystery Costume in a couple of games.

Appears as a starting playable character and the game starts with her introduction. She warps Khrysalis through a black hole, accidently setting up the conflict for the game. While snarky and combative to even her allies, she means well and helps to save the day.

She is one of the slower characters on the game and creates black holes through a chargeable attack. She can also gain power through Earth Stars.

Cosmetta reappears in Super Wario Odyssey as a major NPC in the Ruined Kingdom, where she lays claim to the destroyed kingdom, and imposes a tax on Wario since it's her property. The tax requires half of what Wario earns, so Wario must find a way to get the tax off him.

Cosmetta appears as a playable character in Super Mario Spikers, appearing as a Defensive-type captain. She wears a crimson tank top with matching shorts, similar to the outfits the other female Mario characters wear in other sports games. Her team emblem is a blue, crescent moon similar to her earings and brooch, and her theme is Karutrock.

Cosmetta appears as a starting racer in Mario Kart: V² Circuit. She is a heavyweight with a large size. She has great speed, average acceleration, average handling and poor traction.

Cosmetta appears in Mario Kart: Infinity Remix as a starting character. She is a crusier character, meaning that it has fairly high speed and weight stats, though her acceleration and handling are rather poor. She also has pretty low traction, but very good mini-turbo.

Additionally, she has a course based on herself, Black Hole Garden. It is set in deep space and has several black holes surrounding the track. Black holes can also appear within the course to suck in players, resulting in Lakitu needing to rescue them. Her Cosmic Lighthouse can also be seen in the background.

Cosmetta appears in Nintendo & Fantendo Play: Dodgeball! as part of the Green Faction, the team consisting of Nintendo fan characters. She plays a surprisingly big role in the story as the reason why Waluigi was able to get over to the match up between Fantendo and Nintendo, as she was helping him out of a sense of irony, hoping his plan would hilariously backfire in his face. While it did, it also made him more mentally unhinged, creating the Green Faction and doubling down on his "Luigi" identity.

Cosmetta is seen in the Cosmic Lighthouse. She tells Mario hints and tips. She will tell you important stuff while Mario saves his Birthday Party.

The two have their differences and will sometimes get into debates about the ethics of her job. The two are often shown on friendly terms.

Actually kind of despises him. She doesn't like all the attention he gets and is jealous of the close friendship Rosalina and Mario have. Mario doesn't seem to notice her envy but is quick to jump on her if he feels she's doing something wrong/evil.

Although Bowser didn't open up to her until later, the two have become very quick friends to the annoyance of Rosalina and Mario. She likes hanging out with the Koopalings, even if they don't like her teasing (Lavora hates her guts).

In the same vein as Bowser, Koopa Kid and Cosmetta have become quick friends and have bonded over their pasts of seemingly being abandoned by their families. Koopa Kid actually harbors a secret precocious crush on her, unbeknownst to her. He acts as a friend now, as both of them come from "evil" backgrounds but have since become more heroic and are both looking for their bigger purpose now that their evil past is behind them.

Initially found him repulsive but warmed up to him over the games she was in. Sometimes she will challenge Wario to a race or arm wrestling match and is a very sore loser when she looses. She likes treasure as much as him and took over the Ruined Kingdom during his adventure, which required Wario to find a way around her tax while he was there.

Cosmetta does not like Waluigi but will not openly admit it to his face. During the events of Nintendo & Fantendo Play: Dodgeball!, Cosmetta aided him in his quest to become involved in the story after being left behind, becoming part of the Green Faction after Waluigi's inital plan failed. She did this more out of malice and to watch him fail than actually geuninely trying to help him, which actually turned out bad for her as he formed his own faction and began to actively get in the way of stopping the real conflict, Neithersphere.

Likes to hang out with her from time to time and finds that she is very easy to talk to.

She didn't take him seriously at all during Super Mario: Elemental Journey but learned to respect him during the ensuing boss fight. She finds his eating habits deplorable and doesn't understand how he, a mere Toad, became so powerful. That said, she is intrigued by some of the recent stuff he's been saying...

Finds him super annoying. She follows Poopbutt Koopa's parody Twitter about him. Naluigi doesn't seem to understand Cosmetta's contempt for him though. Also Naluigi always hates it when she mentions those Twitter posts because he finds them extremely annoying. She can be kind of a jerk and Luigi doesnt really like her for it. 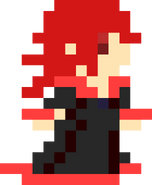 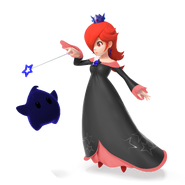 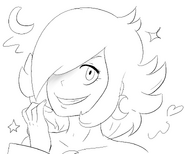 A Cosmic Clone of Cosmetta. 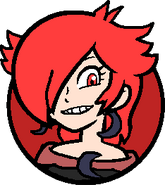 Retrieved from "https://fantendo.fandom.com/wiki/Cosmetta?oldid=3362039"
Community content is available under CC-BY-SA unless otherwise noted.