Corrupted World is a metroidvania developed by Stardust Works as the first project taking place in the Nightflame Galaxy. It features a Bladikori explorer named Jin exploring Xylen V, the planet where the infectious disease known as The Spook began. It was initially released for the Stardust Dragon and Nintendo Switch only, but ports may be coming to other consoles. Currently there has only been a port to one console, the GhostDrive. It has an upcoming sequel called Dark Gods.

Purity Shrines can be found rarely around the world and empty a player's Infection Bar alongside saving the game. Other ways to lower the Infection Bar include using Pure Spells and destroying Light Crystals. Another unique part of Corrupted World is the way weapons work. Jin has two weapon slots, one primary and one secondary. Excess weapons are stored in the inventory. Only two weapons can be used at once.

Corrupted World follows Jin, a Bladikori explorer who is paid by the Galactic Alliance to explore Xylen V, the source of The Spook, a disease that has taken over much of the Nightflame Galaxy, and then nuke the planet to hopefully destroy the Spook. Jin is dropped off in the ruins of the planet's capital city, Zardozia. After defeating the area's boss, Jin is given acess to the large majority of the game. No matter what path the player takes, Jin will eventually end up in the Academy Of Magic, where she finds the accidental creator of The Spook, Archmage Tomni, who has been completely taken over by The Spook. Jin slays the Archmage and radios the Alliance dropship waiting off planet.

Jin meets the dropship and boards, but before the ship can leave, Jin's partner Vandori, who was manning the dropship, shoots her and deliberately crashes the ship into the Academy. There he reveals he was hired by a mysterious person only known as Umbre to bring The Spook back to Arkhalos in order to infect the city. He then chugs a flask given to him by Umbre and transforms into a massive monster. After a sequence in which Jin must activate seven Purity Shrines while avoiding Vandori's attacks, Archmage Tomni is freed from The Spook. With Tomni's aid, Jin manages to take down Vandori and then the two escape to the dropship. Once the credits roll, an epilouge scene is shown where Vandori is picked up by a UFO-looking spacecraft that opens up a portal and goes through it, arriving in an unknown location.

When Vandori crashes the ship, Jin seeks him out instead of activating the Purity Shrines. He asks if she wants to join him, and if the player says yes, they have to kill a Purified Tomni then escape from the planet, which is collapsing due to the nukes detonated during the battle against Tomni, in the ship. After the credits, the UFO picks up the dropship.

Jin seeks out Vandori, refused to help him and manages to defeat him, then kills a Purified Tomni and hijacks the dropship then nukes the planet with it's in built nuclear systems. Then she escapes and destroys a bunch of Galactic Alliance warships. After the credits, Vandori's remains are picked up by the UFO. 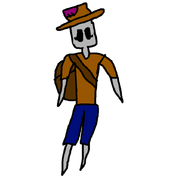 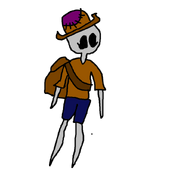 Jin (Current)
Add a photo to this gallery

Retrieved from "https://fantendo.fandom.com/wiki/Corrupted_World?oldid=2833827"
Community content is available under CC-BY-SA unless otherwise noted.