Coronos Williams is the main character of Blood Trance, and a Hemomancer in training at the Scirevicis Academy.

Coronos was raised in Mallowmont, a small fishing village in Marais. As was the tradition in the village, Coronos had been taught Hydromancy and Hemomancy from a young age.

When Coronos was 14, Mallowmont was raided by bandits, who slaughtered most of the population and kidnapped Coronos and another child from the village, Paladia Viscoe, who they intended to have join their group after learning they knew magic. They were tortured through a variety of methods (with care taken to make sure they didn't bleed). Eventually, however, Paladia managed to break through her skin from the inside with her blood (a previously unheard of Hemomantic feat), and rescue them both.

With Mallowmont in ruins, the two traveled to Archoeia. To prevent Coronos from remembering the traumatic memories, Paladia hired the Psions to give him amnesia; she then told him his past, but with multiple lies, including the two of them being childhood friends (when in reality, he had never spoken to her before the kidnapping), and omitting the kidnapping (saying instead that he had suffered a major head wound in the attack and been presumed dead, so only him and Paladia survived). Coronos then decided to study at the Scirevicis Academy, with little else to do and feeling the need to reestablish his identity after losing his memories.

Coronos is tall and skinny. He wears a dark red sleeveless shirt and baggy black pants. He has short, black hair and eyes which are dark brown with a slight red tint, caused by his use of hemomantic magic. His arms are covered in scars (a trait typical of many Hemomancers), from where he has cut himself to make use of his blood-based magic attacks.

Coronos is a very calm person, capable of controlling his own emotions very well. He always seeks a diplomatic solution to any problem, only resorting to violence when he knows it's necessary.

Coronos is skilled at Hemomancy, the magical school related to manipulating the blood of the user or others.

Paladia is Coronos's partner, and he is often responsible for keeping her wild, irresponsible nature in check. He considers her as close to him as a biological sister, and often treats her as such. 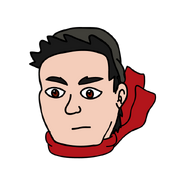 Christmas artwork by Arend (t∣b∣c)
Add a photo to this gallery
Retrieved from "https://fantendo.fandom.com/wiki/Coronos_Williams?oldid=959919"
Community content is available under CC-BY-SA unless otherwise noted.