ColorLoad Blast is the second spin-off to ColorLoad, this time coded by a new company. ColorLoad (RandomFrogg) was the original ColorLoad game starring Koloro, while this game was made with the help of CrazyChippy Ent. This game has nothing to do with Splatoon, as development was started months before Splatoon.

It was an average day in the United States of Creativia, Artsville, with the average activities. Nothing special was going on, but that was the way Artsville liked it; being able to lie back and relax without any interuptions. In fact, most of the ImagiNation liked nothing way too out of the ordinary. There was one rivalry that would never end, though, no matter how many people were laid back - The Color Gods.

Rainbo - the creative Color God aruged that everything had color for a reason, which the other Color God - Greyscape - disagreed with. Greyscape would say that color would be a waste of time, and then Rainbo would say the exact opposite. After 15 years, Greyscape reached a point to where he cracked, and stole the United Staes of Creativia's imagination, causing everything (and many people) to turn grey. Koloro and his friend Kontrast, for some reason, were the only non-Color Soliders uninfected. Rainbo called upon them to stop Greyscape, since they were the only people creative enough to stay uninfected.

As Koloro and Kontrast venture through the land, they come across the Forevergreens, which was inhabited by some greyscale creatures. It wasn't just people turning greyscale, they worried. Koloro and Kontrast took out their Kolorcrew weapons, ready to put a stop to the chaos in the forest.

After defeating Drillbai, Koloro feels happy saving the world from Greyscape's horror, until Rainbo informs the two that Greyscape has even infected Heather Hell, which was located in another dimension. Upon getting to Heather Hell, Koloro and Kontrast feel as if it was impossible to help the ImagiNation anymore. Suddenly, a greyscale wearing colorful clothes flies up on a magic star-shaped rug, and offers to help.

The greyscale claims his name is Portraitor, and he never really liked stealing imagination and color. He was born a Greyscale, which is why he was more sophisticated than the others, trying to convince them that they're doing wrong. After being assigned to steal the color from the entire ImagiNation, he quit, and retreated back to his home, Heather Hell.

Greyscales are infected people who were made to worship Greyscape, and steal color from the ImagiNation. They weren't the smartest when it came to language, but they definitely understand everything Greyscape says. 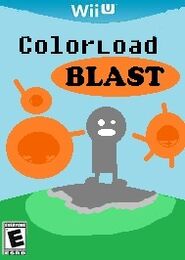