Cloud Mario is an ability usable by Mario in Super Mario Galaxy 2, accessible via the Cloud Flower. Cloud Mario can create up to three clouds by performing a Star Spin; these clouds act as small platforms that disappear after a short time. Every time Mario summons a cloud platform, one of the three small clouds that follow him will disappear. Once all three clouds are used, Mario will not revert back into Super Mario but will need to grab another Cloud Flower in order to allow him to create more.

Interestingly, while Mario can not stand on the clouds summoned by Cloud Mario unless under the effects of the power-up, enemies such as Goombas can. Coins may also remain on one of Cloud Mario's clouds.

Cloud Mario can create up to ten cloud platforms per level before running out. Refills upon entering a new level. 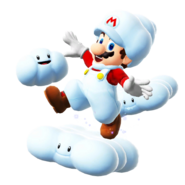 Add a photo to this gallery
Retrieved from "https://fantendo.fandom.com/wiki/Cloud_Mario?oldid=2912285"
Community content is available under CC-BY-SA unless otherwise noted.