Start a Wiki
Clicky is a 3D platformer, exclusive to the Wii U. It is the first installment in the Clicky series which follows the story of the main character, Clicky, as he attempts to restore ordinary weather that the evil Gonna stole, along with the queen of Decrudo Land, Lady Petunia. It was released on April 10 in Japan, April 11 in USA and April 14 in Europe and Australia.

There is a special ritual in a very special place known as Decrudo Land. It is called the Season Switch, in which all seasons come forth at once in the very heart of Decrudo Land, at Petunia Palace. It is a time of great celebration for Decrudo Land, where everyone joins in the celebrations, well almost everyone.

The Crystal Parade was beginning and it wasn't long until the aerofloats came by. Lady Petunia stepped out of Petunia Palace and onto her aerofloat. In front of her aerofloat was the aerofloat from Tiksi, which had Clicky and Gonna on it.

Then in almost an instant, a large storm appeared overhead, and out forth erupted the members of the Tiksi Tribe, who were feared all over Decrudo Land. But they weren't just there for shock value, Lady Petunia's aerofloat suddenly lifted up into the storm, and Clicky jumped to try and save her, but he had no luck.

Gonna then appeared on the aerofloat with Lady Petunia in his grasp as she fights against Gonna but is ultimately beaten. Gonna and the Tiksi Tribe then quickly returned to their storm with Lady Petunia, claiming themselves rulers of Decrudo Land and oracles of the land, whilst Clicky was sitting their in a daze about what was happening.

Soon, Gonna and the Tiksi Tribe left along with their storm. All the people of Decrudo Land blamed Clicky and ultimately wanted him to return Lady Petunia from the clutches of the evil Gonna, leader of the Tiksi Tribe.

With the storm gone, the oracle of weather, Mr. Climate, appeared to scold Clicky. Yet instead of scolding him, Mr. Climate told Clicky about his troubles. Gonna had stolen Mr. Climate's Haven and subsequently put the weather into an uncontrollable state. And only Clicky could convince Gonna to give it back, seeing as he came from Tiksi.

After travelling across the land, collecting Magic Orbs and ambushing Gonna, Clicky can now use the Magic Crystal, which teleports him up to Mr. Climate's Haven.

Mr. Storm, Mr. Climate's brother, is terrorizing the haven, and once Clicky defeats him three times, he can finally get inside Gonna's Weather Tower.

After defeating Gonna, Clicky rescues Lady Petunia and returns the haven to Mr. Climate, who thanks Clicky by letting him keep his powers. Lady Petunia thanks Clicky for rescuing him and asks Clicky if he would like to be the protector of Decrudo Land, instead of laying in the dump at Tiksi Town.

Clicky accepts and moves to Decrudo Village, waiting for Gonna to strike again...

The gameplay of Clicky largely focuses on 3D platforming and collecting. The player will control Clicky over on

expansive, enclosed playing field in which they must complete numerous missions to progress through the story. The missions focus on platforming or completing a certain task, which will be awarded with a Magic Orb which the player can collect. Once the player collects a sum of these Magic Orbs they gain access to more world, eventually leading up to the final world and completion of the game.

Clicky also features an interesting gameplay feature in which the player can manipulate the temperature of the world, either setting it in a boiling land or a freezing land. The player will be restricted as to how many times they can do this, as a power bar will indicate how many times they can change the temperature of the world. To refill this bar, the player will have to collects Tears Of Heat or Tears Of Cold which are commonly found throughout the game. To heat up the world, the player will have to quickly swipe numerous times to warm the world, and to cool it down, the player has to spin the GamePad around which set a icy gale across the world and freeze it.

Clicky includes online features, much similar to that of Super Mario 3D World. Like most games, Clicky has a Miiverse community where gamers can post comments on the game. In-game, you can race against ghosts on levels you've previously beaten. The ghost players will change, depending on your best time for that level.

There also is an online mode which will pit you against your friends or others on the internet. In this mode, each world has a different challenge, such as getting to a specific spot before the other players, collecting a certain amount of Crystal Shards before all the other players among other tasks.

In total, their are 8 bosses fought throughout the entire game. However some are fought more than once.

In Clicky, each world consists of 4 Magic Orbs. In total their are 20 worlds, equalling 80 Magic Orbs total.

Development for Clicky began in the middle of 2013. It suffered a hiatus where it was confirmed and then almost scrapped until development for it began once again. 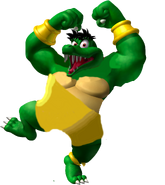 Artwork of Gonna
Add a photo to this gallery

Retrieved from "https://fantendo.fandom.com/wiki/Clicky?oldid=1919945"
Community content is available under CC-BY-SA unless otherwise noted.