This article is about the power-up. You may have been looking for NES Mario.

Classic Mario is one of Mario's Power-Ups. Mario can access this form by eating a Classic Mushroom.

Classic Mario can let appear Hidden ? Blocks with Coins inside everywhere he jumps. The distance between the block and the ground Mario stands on is at least 5 Blocks high. This has pros and cons: The good side is, that Mario can make platforms of Used Blocks (since ? Blocks turn into Used Blocks), so reaching secret places. The bad side however, is that Mario can't reach the upside of these platforms, nor even places that takes high jumps, if he stays jumping so. Mario has to wait thus before reaching it. The effect is just temporary, luckily. So, Classic Mario will just turn into Super Mario when the effect lasted. In New Super Mario Bros. ♪, only Mario's (or Luigi's) clothes are changed.

In SMWWii, the Classic Mario power-up has been altered a little. Mario now has a blue shirt and hat, and red overalls. The Classic Mushroom is also now blue, with red spots. 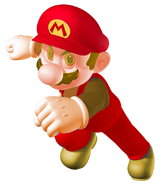 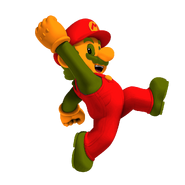 In Mario Bros: Blast to the past. Classic Mario was playable without a powerup. It also featured Classic Luigi