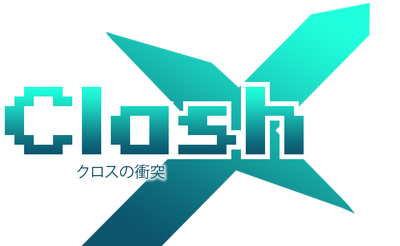 Clash X (pronounced Clash Cross) is a crossover one-on-one close quarter combat fighting game developed by GrapePixelArt. The game was released digitally on June 20th, 2020 for the Nintendo Switch, PlayStation 4, and Steam, with a PlayStation 5 release and physical releases planned for an unconfirmed release date.

The game features characters and locations from across gaming history. A big selling point is the game's massive catalog of franchises represented. The game features originally created pixel art for it's visuals. As many can tell, the game takes heavy inspiration from Super Smash Bros and Card Saga Wars.

Like many fighting games, the goal is to defeat your opponent by reducing their health bar to zero with a plethora of attacks and abilities. Gameplay has attempted to be simplified to welcome casual players, but to still be comfortable for competitive audiences. Fighter's movesets have been aligned to be similar to the actions and controls of the Super Smash Bros. series of games.

Versus is the standard mode of Clash X. Versus is a multiplayer mode that allows players and/or CPUs to fight in a variety of settings. There are nine different gameplay combinations to choose from. Players can create and save Rulesets as well so they won’t have to put in their preferences every time.

Tourney is a multiplayer mode where up to 64 players can be placed into a bracket. All of the gameplay combinations and rulesets saved to the game are available to use. Two players can use the same characters by using different palette swaps. Players also have the option to choose from a single or double elimination bracket.

Arcade Mode is a single-player campaign game mode. In this mode, the player must choose a character from a roster and select a difficulty indicated by the position on a scale. The highest allowed starting intensity is 5.0, and it will increase slightly, depending on how well the player performs after each victory to a maximum of 9.9. Players will only have one life (rules apply to whichever style selection the player is in). If the player loses, they have the option to continue via either spending Gold, which lowers the difficulty by 0.7 points or use a Arcade Mode ticket (which is won randomly in Versus matches or bought from the Shop) to keep the current difficulty. Using a Arcade Mode ticket at any point during the run will stop the difficulty from rising to 9.9, making the maximum possible difficulty 9.8 for the rest of the run. If the player loses again after using a ticket, they will receive an automatic game over.

The layout of Arcade Mode consists of 10 stages, with Level 4 being a round of Endless Targets, Level 9 being a 1v1 mini-boss match-up, and Level 10 being a boss. The rest of the rounds are various Versus matches with a variety of different settings. If a player loses Level 4, they will not receive a lose or game over, but it will effect their end score. Level 9 will feature a random skin of a character (ranging from Doppelganger Arle - Arle, Shadow Lady - Chun-Li, Robo Heavy - Heavy, The Other - Kat, or Dark Link - Link) with increased stats and more health, and the final boss of Level 10 will predetermined boss fight at the end of their route that applies to whichever character the player has chosen. The player must deplete the boss's HP in order to defeat them.

When the player completes Arcade Mode with a given character, there will the possibility that the player will be confronted by Challenger Approaching duel. All of the eight starter characters have their own character unlock trees. They are updated as the game receives updates, but the player will never lose their current roster of characters if a starter's unlock tree is changed. The challenger is determined by the 1st Player character's assigned tree, and will be the next character from the top of their tree down who has not already been unlocked by a Challenger Approaching duel. When all the characters in a tree are successfully unlocked, completing another Arcade Mode run with any of those characters will unlock the next available character from Arle's tree, then Chun-Li's tree, and going forth.

The Shop is a feature where the player can buy a variety of in-game collectables using Gold. Gold is an in-game currency gained from completing Arcade runs, Versus matches, Online matches, and numerous other ways.

When selecting the shop, the player will be brought to a side-scrolling hub. The player will control a Servbot from Mega Man Legends, with a Toad from Super Mario as the cashier. In front of the entrance is the counter where Toad will greet the Servbot. To the right of the counter are various aisles with different categories of collectables. When the attack button is pressed while the Servbot stands in front of an aisle, a menu will pop up featuring all of said aisle’s available collectables relating to their category. The player pays for all the items via the menu, so they don’t actually have to go up to Toad and pay him. However, Arcade Mode tickets are available for 1,000 gold each at the front counter. The player can buy up to three a day. Once the player walks out of the entrance, the player will return to the main menu.

News is a menu item that allows players to access a list of articles detailing about newly added or upcoming content including new characters, patch notes, game updates, and more.

At launch, there were twelve playable characters within Clash X. Characters are sorted alphabetically by default, but players can customize the organization within Vault and Options. Characters range from franchises from big video game publishers such as Nintendo, Sony, Capcom, Sega, Bandai Namco, and Square Enix, alongside popular indie creators like Team Cherry.

After the game's release, the game plans to add multiple free DLC fighters to expand the roster. Characters are added alongside game patches.

At launch, there are 18 stages in Clash X. Like most close quarter fighting game stages, every stage has a flat surface, but players have the option to toggle on Battlefield forms, inserting three floating platforms (with the middle being the highest) into the stages. Most stages are available within the shop and are payed through in-game currency.

Assists are a big part of the game. Players will charge up an Assist Gauge as they deal and receive damage, but will charge faster if they are losing. The Assist Gauge charges up relatively faster than the Rathe Gauge. When an Assist Gauge is charged up to Level 1, a randomized character applying to said level will be available to use. A portrait will appear in the bottom corner (bottom left for player 1, bottom right for player 2) displaying who the player got for an assist. When activating an Assist Call, the assist will appear to help the user. Actions can range from attacking the opponent, to healing the user, and so on. Levels signify how strong an assist with three being the highest.

Retrieved from "https://fantendo.fandom.com/wiki/Clash_X?oldid=3248075"
Community content is available under CC-BY-SA unless otherwise noted.