Circe Lotte is a Ocean 11 mob member lives in Seattle, Washington, aided by her Standing Ripple known as BABYMETAL. She joined the mob after seeing the lucrative wealth from mob members she came across- she interestingly joined the mob as a way to make money and she didn't even realize the Standing Ripples side to the mob. The character was created by Helena Harper (t∣b∣c) for a conflicted member of Ocean 11.

Circe Lotte is a relatively young woman who works in the Ocean 11 mob. She enjoys a lifestyle of wealth due to her tasks in the mob- which vary from making shady deals, dealing with those who do not pay up, and shipping drugs. Her abilities have been instrumental in increasing the mob's power. While she could come off as heartless and only caring about wealth, she does have a softer side that is more out around her sister, Pasiphae Lotte, who lives a modest job as a librarian.

Circe Lotte is a blonde woman with relatively short hair, kept together with a black hairband. She has brown eyes and wears red eyeshadow. She has a simple but beautiful look to her. She wears very expensive clothes, often crafted from fine silks. Her normal outfit has her wear a red button up shirt made of very smooth silk, while wearing a black suit and a brown skirt made of fine leather. She wears red high heeled boots. Her and her sister have a mirrored birthmark shaped like an apple on their backs.

BABYMETAL is a Standing Ripple that is based off Kabuki masks and has a overall robotic appearance. The "face" of the stand is based off a kitsune Kabuki mask with a red leaf in the center of the mask and red thunderbolts on the side. They "wear" a one-piece outfit that resembles a performer's outfit in a red color, with a black belt wrapped around the center of the torso and shoulder pads. They have a long tail of black and blue colors. Dull blue "flames" roll on the top of BABYMETAL, which grow intensity depending on how much chocolate they have consumed.

Circe is a complicated character. While her job requires her to be somewhat heartless and to enact actions of extreme violence, Circe is actually pretty casual and loves fun. Her lifestyle of wealth, which she wants to maintain and does so through by acting with the mob, allows her to carelessly spend on expensive clothes and fine food. It is through this connection that she comes across Nycho Invalidez. More about that... eventually.

She cares deeply for her twin sister, Pasiphae Lotte and would never try to upset her in any way, at least to the extent that doing something would upset her. This is why she has never told Pasiphae exactly what she does all day, often giving her vague descriptions that are never questioned. She clearly cares a lot about her and likes to maintain her friendship.

Circe often cracks lines when on her job or in public settings, being fairly relaxed and free to whatever her friends and family want to do. She is open to a lot of experiences and doesn't have a lot of reservations, although she does not like untidy spaces and will spend the time to clean things up even if the person in question rejects this. She can sometimes come off as non-respecting of people's choices if they go against her own.

Circe Lotte's powers and abilities come mostly from her Standing Ripple, BABYMETAL. BABYMETAL's primary ability to cut through flesh and living organisms, ignoring the space around them. This is done through karate like motions and "cuts" across a radius of up to 30 feet. This will not cut the world around BABYMETAL, allowing them to cut through the environment to slice off a person's arm or leg. This also technically doesn't count as interacting with the environment, so this Standing Ripple is considered amazing for combat as it can do major damage while intangible. It does come with some issues; in heated situations, BABYMETAL can cut off unintended pieces off her opponents.

BABYMETAL has a secondary ability in that it can hand Circe it's mask to wear to transform into a fox or kitsune for a temporary amount of time, which runs off it's final ability in that it can be powered up by eating chocolate. While in fox form, Circe can fit through tight spaces as well as fire off fireworks from it tail. When powered up and becoming a kitsune with multiple tails, Circe can fire off more projectiles as well as increase their strength. BABYMETAL can also power it's slicing power through chocolate. The darker and richer the chocolate, the more power it gives BABYMETAL. However, the more chocolate it gets, the more unmanageable their great power becomes. 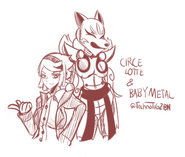