The Chorus Kids appears as a trio: the main Chorus Kid who does the attacking followed by the other two Chorus Kids. The Chorus Kids are a rhythm based fighter whose attacks are based off a beat that is created by the other two Chorus Kids. They perform this beat by clapping and will change in tempo and timing on occasion. Attacks that are inputted on the beat maximizes the knockback and the damage thus allowing the Chorus Kids to land powerful hits that can do high damage and knockback. However, these attacks are considered whiffs if they fail to be inputted and land. They will only stop clapping if they are hit or interrupted by an outside force. This includes any sorts of attacks, barriers, projectiles, or forces. Examples includes regular and special attacks, Fox's Blaster, Mario's F.L.U.D.D., and items like the Gust Bellows. If one of the Chorus Kids are KO'd, the tempo slows down and the amount of damage done on each beat is significantly reduced. If the player has high amounts of damage, the beats come quicker and more often while lower damage percentages results in slow beats. If both Chorus Kids besides the main one are KO'd, then the remaining Chorus Kid's damage output is severely reduced. Therefore, it is important to keep your team safe by attacking and moving.

In terms of gameplay, the Chorus Kids are fast and have a very high jump that allows them to travel far distances. They have an above average walking speed and a fast start up for dashing. However, they are incredibly light and can be knocked back with powerful attacks. They have slower falling speed which is both helpful and can hurt the Chorus Kids.

A flourished remix of the "Superb" song from Rhythm Heaven Fever.

The main Chorus Kid sits down by slightly squatting down with the knees help upwards.

The main Chorus Kid has a slight rigid feeling to it. The other Chorus Kids heads tilts upwards.

The three Chorus Kids rolls forward in a ball.

The Chorus Kids walks forward with the other two trailing slightly behind.

The main Chorus Kid runs forward with the two other Chorus Kids running behind them.

The main Chorus Kid is sitting while slumped over while the other two are trying to wake it up.

The main Chorus Kid trips and lands on its butt.

The main Chorus Kid stands on the ledge waving its arms while trying to balance itself while the other two are pulling the main back.

The main Chorus Kid uses both hands and swings forward.

Goes "AHHHHHHHHHHH!!!!" from Glee Club after the composer says "Together now!" in Glee Club.

All three Chorus Kids slam into the screen; first the main one and then the other two one after another.

Chorus Kids's trophies can be earned by completing Classic Mode, Adventure Mode, All-Star Mode, and Boss Battle mode. In addition, further trophies can be found during matches and at the Trophy Shop. 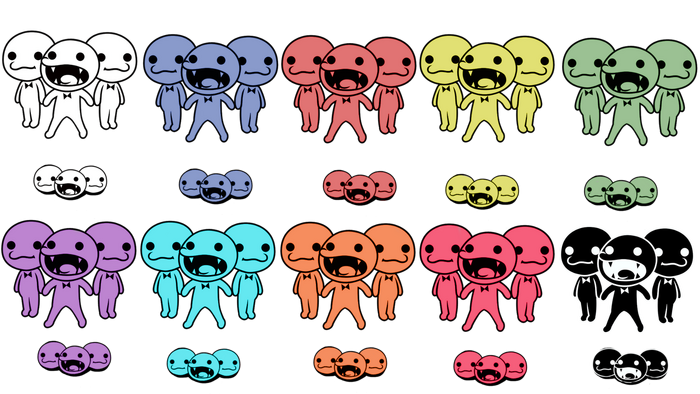 The trailer opens with Mario, Link, Samus, Pikachu, Kirby and Takamaru walking down a white hallway. When they reach the end of the hallway they hear an 'Aaahhh!' noise. Mario rushes forward to the noise, and skids to a halt at a pure white door, which has writing above it which reads 'Glee Club'. Link, Samus, Pikachu, Kirby and Takamaru catch up to him and listen to the strange noises behind the door. They seem to be singing seperately, one after the other. Mario takes out a master key from his hat, unlocks the door and pushes it open very slowly. The door then squeaks, and Mario leaps back, as the singing immediately stops. In the top left corner of the screen was a little fuchsia P that suddenly disappeared when Mario made the door creak. A voice then says 'Together now', and Mario is instantly knocked backwards into the wall behind him as a large sound wave erupts from the centre of the room. The camera whirls round to reveal the three Chorus Kids, and their conductor. The conductor looks very angry with his baton raised, while the Chorus Kids get into a battle stance. It then fades in to some gameplay footage. The song 'Lonely Storm' starts.

Then the Super Smash Bros. 5 logo fades in.

In a post-credits scene, a mockup of the rating screen from Rhythm Heaven appears. It reads:

Retrieved from "https://fantendo.fandom.com/wiki/Chorus_Kids_(Smash_5)?oldid=2739197"
Community content is available under CC-BY-SA unless otherwise noted.