Chilly is an enemy from Kirby (series) that tries to freeze Kirby. If Kirby copies Chilly's ability, he can make Chilly his friend.

Chilly appears in Sonic Speedball RPG. The weird thing is that Kirby does not make an appearance in the this game.

Chilly reappears in Sonic Speedball RPG II: The Coming of Chaos! and this time Kirby appears in the game.

He appears as a playable character in the game, along with a few other Kirby helpers.

Chilly appears as both a rare enemy and an ability for Kirby. He will pop out of a ? Block and try to attack any of the characters. If Kirby inhales the enemy or if Meta Knight gains his ability with the sword, they will get the Ice ability. This does the same thing that an Ice Flower does. 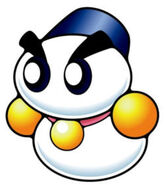 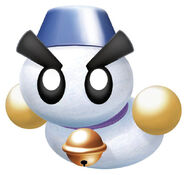 A Chilly In 3D 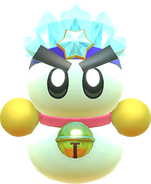 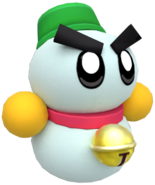 Kirby Star Allies model.
Add a photo to this gallery
Retrieved from "https://fantendo.fandom.com/wiki/Chilly?oldid=3203879"
Community content is available under CC-BY-SA unless otherwise noted.