Chillter is a star warrior from the kirby franchise.

Chillter is a Light Blue Star Warrior, like Meta Knight he is similar to Kirby but has some design differences. He has orange eyes and the same coloured hands his feet are a slightly purple towards the back, he has a dark blue wooly scarf with three snowflakes on the ends of each side lined up horizontally, he is slightly bigger than kirby.

When he has the icicle ability, a few icicles appear on the top of his head, for the Ice Spear ability he wears a dark blue bandana with snowflakes around the bottom front and sides, he holds a spear with a wooden pole and a spike made of ice. With his Ice Sword ability be has a knights helmet with the face mask up over his whole body as he holds a sword made of ice.

His Wooly Whip ability has him wear a busted up and torn brown cowboy hat as he holds a whip made of dark blue wool. His bomb ability's hat is purple, floppy cap with a white rim and blue pompom on the end. With the Fighter ability Chillter wears two red boxing gloves. When he has the Hammer ability he wears a dark blue woolly winter hat with a white pompom on the top.

With the Hi-Jump ability, Chillter has dark blue wings attached to his hands and when he has the Ninja ability he wears a dark blue wooly mask covering his body with a hole for his eyes.

Chillter is lonely and not so cheerful, he is normally quite serious, if you aren't his enemy he is respectful towards you and trustworthy but if you are his enemy or considered hostile he is aggressive towards you.

Chillter has a varied amount of abilities, he can freeze foes in place with his ice breath, he can steal abilities if he rests one of his hands on a frozen enemy, some abilities are slightly altered.

However, he can only copy these abilities:

Chillter is also no stranger to hand to hand combat, he prefers punches and kicks to grabbing and throwing.

Chillter with colour, message me if you can make a shaded version. 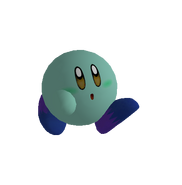 Kirby's Chillter Costume in SSBB! (custom made by me!)
Add a photo to this gallery
Retrieved from "https://fantendo.fandom.com/wiki/Chillter?oldid=2843705"
Community content is available under CC-BY-SA unless otherwise noted.