Chill Bullies, also called Ice Bullies, are frozen Bullies that appear in Super Mario 64. Only found in Snowman's Land, on an icy platform above cold water. It has an almost identical behavior to other Bullies; it will charge at Mario, attempting to push him off the platform. To defeat it, Mario would need to push it back with punches, kicks, and Ground Pounds. If he manages to push it off the platform and into the icy water, it would melt and reward Mario a Power Star.

In terms of appearance, Chill Bullies are different in that they have blue, frozen bodies. In addition, in contrast to regular Bullies that have two horns, these have a single horn sticking straight up on top of their head. Chill Bullies also resemble Chief Chilly.

A Chill Bully appears there as the Fortress boss of World 4. It is basically a weaker version of Chief Chilly, it's leader, who appears in the same game as well. Mario has to push it in the cold water with his Spin Jumps, before the Chill Bully does the same thing to Mario.

A Chill Bully, as it appears in Super Mario 64 DS 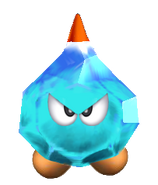 A Chill Bully as he appears in Super Mario Galaxy D.I.Y. 2

A Chill Bully in Super Mario 64 Switch
Add a photo to this gallery
Retrieved from "https://fantendo.fandom.com/wiki/Chill_Bully?oldid=3210074"
Community content is available under CC-BY-SA unless otherwise noted.