Chickens is a Free-to-Play Artillery Strategy game based off the Worms series created by Gearworks Gaming for the Hybrid Δ and PC. The game revolves an unending war between Chickens as they use Revolvers, Firework Launchers and Cluster Bombs to blow each other apart.

The farm is a peaceful place, with horse frolicking, sheep being sheared by underpaid farmers and where cows endanger the grass population. As anybody knows, peace never lasts forever and after one of the farmers takes the eggs from the Chickens' nest, hilarity ensues as each blames each other for taking the Eggs away and thus, the events of Chickens begin.

The Menu is the game's main hub and contains various different areas which the player can visit once the player has created a profile for the game:

During the battle, the player waits for his turn to come to one of his Chickens. Once the player is chosen for the turn, he/she can be able to move their chicken around with the WASD keys. When ready, the player can select a weapon which is in their inventory and use it against their opponents. Once the player has used their weapon or the timer has run out, the turn will go to the next person. There is also a battle timer, which times how long the battle is until the end or until Sudden Death. In the basic battle mode, the Player with the last Chicken standing will win the match. Should Sudden Death occour, each player will be given a single unit of health and must kill the enemy as fast as possible. Once a player has won a battle, they will be awarded EXP, which will contribute to their level.

Cluckbux are the game's premium currency, used to buy special weaponry, clothing and accesories such as hats and to speed up the process of Research. CluckBux can be earned by:

Cluckbux can then be used to:

Campaign Mode is a single-player mode where the Player must complete certain objectives and face off with NPC Chickens. The Campaign Mode has no plot and generally just contains missions with random objectives. Currently, there are seven Campaign missions, with more to come with updates.

This link will direct you to the weapons page.

Cobweb described the game to be "the most original game we've had in forever" and commended the trailer. Pika Productions were impressed by the large amount of ingame weaponry which could be found and the game overall, mostly with the other features ingame and the trailer.

The Fandemonium Update was an update released to promote both Chickens itself and Fandemonium 2. The update featured a new "Tournament Elimination" mode, where within 3 turns, those who have caused the least damage are eliminated from the game, in illusion to Fandemonium's tournament-style system. Several new maps official maps were added such as The Waterfall and new costumes were added in the update which could be unlocked through achievements.

The (Belated) Christmas Update was an update which was "meant to correlate with christmas but didn't make the cut" and has been instead released four months later. The update adds several new weapons such as the Ornamental Bomber and the Frost-Gun alongside new achievements. 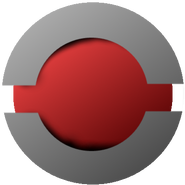 An image of the Daddynade weapon.
Add a photo to this gallery

Retrieved from "https://fantendo.fandom.com/wiki/Chickens?oldid=1331767"
Community content is available under CC-BY-SA unless otherwise noted.