Chiamomo is a Dolluhan that works alongside Mindy Starlane and makes her debut in World Tournament. She can only speak in a simplistic langauge consisting entirely of the sound "Chiamomo", and the only people able to understand her are Mindy, Obena, and oddly enough, Nycho Invalidez. The character was created by Exotoro as a friend for Mindy Starlane as well as to help flesh out the story of World Tournament.

Chiamomo is a partner to Mindy Starlane, working as her body guard and friend. She is only able to communicate through a simplistic language consisting of saying "Chiamomo". She has the ability to turn her limbs into functioning weapons and to completely disassemble herself into a bunch of limbs hopping on the floor. She is Mindy's only friend and while she may appear very comical, takes herself completely seriously.

Chiamomo is a small character with blue skin and green hair. She wears a Chinese style martial outfit with pants and shoes. Her limbs are able to transform into weapons such as swords, guns, axes, and more, although she cannot match the firepower or strength of specific weapons. She also wears thick glasses and typically has her eyes closed. When using guns for instance, the bullets are made from the same hard flesh material the rest of Chiamomo is made of.

Not much is known about the elusive Chiamomo, who speaks exclusively with one word, which is just her name. Despite this, much can be inferred about her conversations with people who are able to understand her, like Mindy Starlane or Obena. With her conversations with Obena, it's made clear that she is apparently just cursing all the time and uses rather foul language in a rather descriptive way.

Chiamomo carries herself rather aggressively and seriously. She doesn't smile very often and treats every fight like a life or death situation. She is close to immortal, with her age being specifically rather young for her species.

She is able to put up with Mindy Starlane, her best friend, far longer than anyone else in Mindy's life and serves as support, even though she's not the best equipped to deal with it. She has been stuck with a toxic individual for most of her life but her focused mind causes it not to be as stressful as it could be.

Chiamomo has the ability to shift her limbs into any weapon she desires, such as swords, guns, axes, and more. Guns are weaker than they would seem due to the bullets being made out of the same material as her hardened skin. She cannot match the specific powers of weapons, just the shape and basic function of certain devices.

She can also pop off her limbs and control them independently. She could pop off her head or hand and control it remotely, even miles away. However, these limbs are stuck with the sense that they have- a hand cannot see in another location but it can feel around.

They have a close friendship, with Chiamomo being the only of Mindy's friends still with her. They fight together, often going on mercenary missions in order to pay for Mindy's vices or whatever debt she owes. Mindy is one of the few people that can understand Chiamomo, so it's possible Chiamomo feels obligated to stay with her because she's the only person that can even give her company to begin with. Chiamomo attempts to help Mindy with her problems but is ill-equipped to actually deal with them. 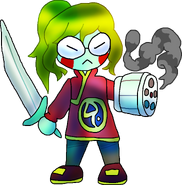