Along with Fennekin and Froakie, Chespin is one of three starter Pokémon of Kalos available at the beginning of Pokémon X and Y.

Along with Fennekin, Froakie, Xerneas, and Yveltal, it was the first Generation VI Pokémon to be revealed to the public on January 8, 2013 as part of the Pokémon Direct broadcast.

Chespin is a bipedal, light brown creature with dark brown arms and triangular facial marks. It has a round incisor, oval eyes and a triangular, orange nose. It has a lime green shell made out of wood covering its back, as well as its head, making it resemble some sort of hoodie. Its shell also covers its tail, which also has a red tip. On the back of its shell is a small, brown spot found on the left side. It also has several leaf-like spikes on its head shell - two on each side of its forehead, one near each cheek, and a bundle of three on the back of its head.

Chespin's shell is so thick that it wouldn't even be fazed when directly hit by a truck. The spikes on its head, in contrast, are quite soft, but Chespin is able to make them rock hard and needle-sharp when it flexes these. In this state, Chespin's spikes are even able to pierce through rocks.

Chespin is based on a hedgehog and a chestnut shoot. It also resembles some sort of rodent, like a chipmunk.

Chespin is a combination of chestnut and pin. It may also derive from urchin (an old term for hedgehog), chinkapin (some kind of chestnut), and spina (Latin for thorn).

Harimaron is a combination of 蝟 harinezumi (hedgehog), 針 hari (needle), and marron (French for chestnut).

An Artist's interpretation of Chespin

A Sprite of Chespin 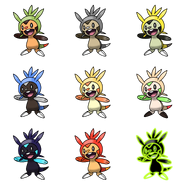 Clemont's Chespin as it appears in Multiverse of Gaming
Community content is available under CC-BY-SA unless otherwise noted.
Advertisement