Start a Wiki
“When they get a taste of this, I'll be the hottest chef in town!”
— Chef Kawasaki


Chef Kawasaki (sometimes called Cook Kawasaki or just Kawasaki) is a character in the Kirby series, debuting in Kirby Super Star as a mini-boss. In later appearances he appears as an ally or friend to Kirby.

Chef Kawasaki is a tall, orange egg-shaped character dressed in a apron with a blue striped pocket. He also wears a chef hat ontop of his head. He has red feet similar to Kirby. He is usually carrying a frying pan in his hand, which sometimes has a metal ladle. A tougher version of Chef Kawasaki debuts in Kirby Star Allies with white skin and a black pocket apron and chef's hat. When he becomes a ally, he gains a star on his chef hat just like Cook Kirby.

Chef Kawasaki returns as a mini-boss in Kirby: Dream Land's Hope, mostly unchanged from his appearance in Kirby Super Star.

Chef Kawasaki appears as an ally in Kirby: United, running the shop in the game where Kirby can buy items or have Chef Kawasaki cook recipes for the party. When Kirby and his party get Chef Kawasaki to cook the ultimate recipe, he will join the party as a support character. He serves as a healer and a tank with his high defense and cooking skills. In order to cook and attack properly, he needs to monitor the Heat and Water in his massive pot.

Chef Kawasaki appears in Kirby: Nova Zoo as one of the four Dream Allies unlocked from the start of the game, joining Kirby on his adventure to escape the titular Nova Zoo after Susie convinces him to work with Kirby. He has a greatly expanded moveset based off his Kirby: Star Allies appearance as well as some moves inspired by Kirby: United, with some brand new moves added to the mix as well.

Chef Kawasaki is portrayed as having two main abilities:

He also tends to attack using his strength out of rage, jumping up and down as he does. In Kirby Star Allies, he now throws cups and spoons in addition to the plates and a harder version of Kawasaki has the ability to extend his ladle across the entire screen. This harder version also has a new attack where he throws plates, cups, and spoons from the air as he spins. As a ally, he is able to use the Cook ability and has to wait for the cooldown to end before performing the ability again.

In Kirby: Nova Zoo, it is possible for a second player to play as Chef Kawasaki and control him, allowing players to use a wide movepool of moves for him. 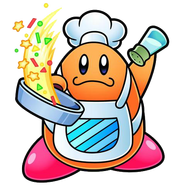 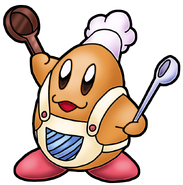 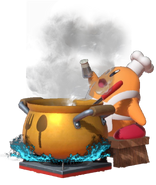 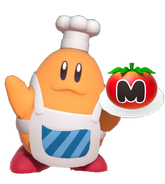 Retrieved from "https://fantendo.fandom.com/wiki/Chef_Kawasaki?oldid=3226000"
Community content is available under CC-BY-SA unless otherwise noted.