Cheeky Nando's Mario is another form of Mario, after eating at Nando's.

When in Cheeky Nando's mode, Mario wears an orange hat and shirt, with red overalls with grey buttons. The orange colour is to represent the cheekiness of the Nando's, whereas the red cheekily connotes Nando's spicy meals. His hat also has the Nando's logo instead of the standard letter "M". Mario's eyes sometimes change colour and become orange, but only when his meal at Nando's was extra cheeky.

It is a well known fact that Nando's provide top quality cheeky chicken, after eating a Nando's, Mario can get a bit cheeky. When with his friends, Cheeky Nando's Mario is known to have top class banter.

After eating a piping hot plate of good old Cheeky Nando's, Mario has the ability to create top class banter, which will create a good relationship with the enemies, meaning that they join Mario's side and let him past instead of trying to kill him. What a lad.

Feel free to release the cheekiness into your own games, and then add them here:

Cheeky Nando's Mario appears as an assist in Super Fighting World. He follows the opponents and makes them laugh uncontrollably, providing the summoner a chance to attack. 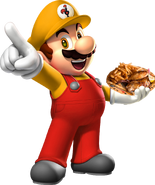 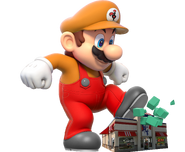 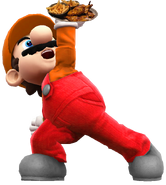 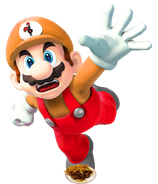 Mario trips over a plate of Nando's he carelessly left on the floor. 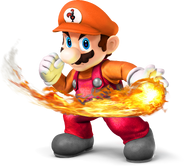 Super Fighting World
Add a photo to this gallery
Retrieved from "https://fantendo.fandom.com/wiki/Cheeky_Nando%27s_Mario?oldid=3199829"
Community content is available under CC-BY-SA unless otherwise noted.