Charmanders are a Fire Pokémon species whom resemble lizards, and acts as one of the three starters from Pokémon Red, Blue and FireRed LeafGreen. Their skin is bright-red coloured and has a small flame on its tail. It evolves to Charmeleon at level 16 whom then evolves into Charizard at level 36.

Charmander are orange-coloured lizard-resembling Pokémon with fire on their tails. In early games, they also had a line of spikes on the back, which was removed in later appearances.

Charmander is recieved in a special way in the Nintendo DS games Pokemon Iron and Amber. When you go to Charific Valley the dragon tamer Claire gives you a Charmander when you promise not to tell anyone where she is

In Pokemon Bronze, if you chose a Fire starter, the Fightful Sisters will give you a Charmander after you battle them.

In Poke Kart U, Charmander appears as a starting character. His special move is Ember.

Attracted by: 1 Volcano and 2 fire fields.

Repeled by: At least 2 feet of water. 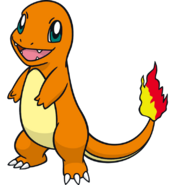 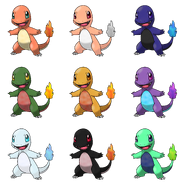 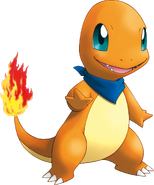 A 3D Model of Charmander 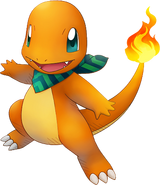 Generation VI (Shiny)
Add a photo to this gallery
Retrieved from "https://fantendo.fandom.com/wiki/Charmander?oldid=2995629"
Community content is available under CC-BY-SA unless otherwise noted.