Charizard is the version mascot of Pokémon Red and FireRed Versions. It also makes an appearance on the Pokémon Ranger, Pokémon Stadium, and Pokémon Mystery Dungeon: Explorers of Sky boxarts.

Charizard is voiced by Shin'ichirou Miki.

Charizard is a draconic, bipedal Pokémon. It is primarily orange in coloration with a cream underside from the chest to the tip of its tail, which burns with a sizable flame. Charizard has a long neck, stern-looking blue eyes, raised nostrils, and two blunt horns protruding from the back of its rectangular head. Two fangs are visible when its mouth is closed. Two large wings with teal undersides sprout from its back, and a horn-like appendage juts out from the third joint of each wing. Charizard's arms are short and skinny compared to its robust belly, and each limb has three white claws. It has stocky legs and cream-colored soles under its feet.

As Mega Charizard X, its body and legs appear more physically fit, though its arms remain thin. Its skin turns black with a sky blue underside from the lower jaw to the tip of the tail. Two spikes with blue tips curve upward from the front and back of each shoulder, while the tips of its horns sharpen, turn blue, and curve slightly upward. Its brow and claws are larger, its snout is shorter, and its eyes are now red with white pupils. It has two small, fin-like spikes under each horn and two more down its lower neck. The lower trims of its wings are divided into large, rounded points and each third joint is adorned with a claw-like spike. Mega Charizard X breathes blue flames out the sides of its mouth, and the flame on its tail now burns blue with increased heat.

When Mega Evolved as Mega Charizard Y, this Pokémon becomes more sleek and expansive in appearance, but retains its normal coloration, except for white pupils. It has three pointed horns, the middle of which is longer than the rest of its skull. Its shorter snout has larger fangs and a ridge on the nose. Its neck is shorter and its hands are much smaller, but its torso and legs are longer. Small wings develop on its wrists, while the ones on its back become larger and now have ragged edges. The back of its tail has a large thorn at the base and three smaller ones near the tip, which now burns with a longer flame. Mega Charizard Y is said to have incredible flying prowess, being able to reach incredible heights.

This Pokémon flies in search of powerful opponents to battle, and its fire will burn hotter as it gains experience. Its fiery breath is capable of melting boulders, massive glaciers, and has been known to accidentally cause forest fires. Charizard typically inhabit mountains and valleys. The anime has shown that only a weak Charizard would show off its power, and that a group of Charizard resides in the Charicific Valley in Johto. It has been shown in the anime to lick its trainer similarly to how a dog will lick its owner.

Charizard is a starter veteran playable character that reappears in Super Smash Bros. Calamity. Charizard has gained some major buffs than its previous playable appearance, gaining some new moves in his ground attacks, aerial attacks and throws.

Charizard appears as a playable character.

There are two Charizards in the playable roster: Pokémon Trainer's Charizard and an independent Charizard who can Mega Evolve into Mega Charizard X in his Final Smash.

Charizard is a playable character in Pokkén Tournament for the arcade. It has eight palette swaps.

Charizard resembles a European dragon, certainly one of many forms told and rendered in legends.

Charizard is a portmanteau of the words char (to burn) and lizard.

Lizardon is a combination of lizard and either dragon or don (Ancient Greek for tooth, commonly used in dinosaur names). 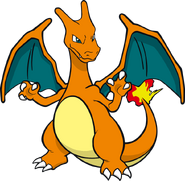 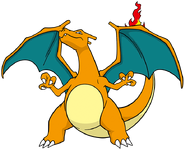 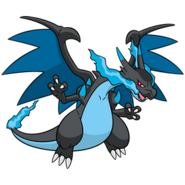 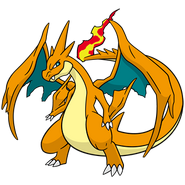 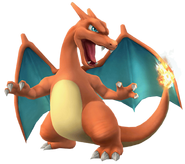 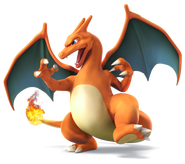 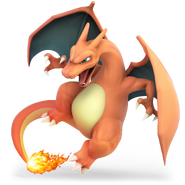 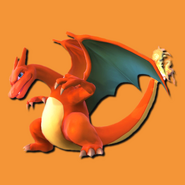 A kart modelled of Charizard, the Charikart.

A red and blue Charizard. 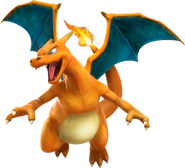 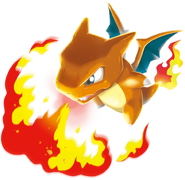 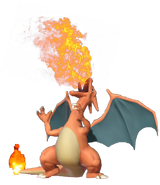 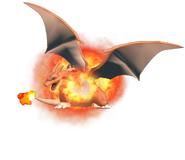 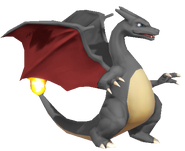 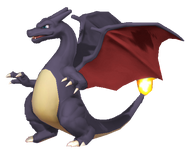