Chargin' Chucks are a type of Koopa Troopa that wear American football gear. They first appear in Super Mario World as fairly durable enemies; Mario would need to jump on them three times before defeating them, or fire several Fireballs as Fire Mario. They later reappear in Super Mario 3D World, where now they only need to be jumped on twice. However, after the first jump they would lose their helmets and become enraged, attacking faster.

Chargin' Chucks have a many attack patterns based on sports such as baseball and American football. With the exception of the Whistlin' Chucks, a jump on them will make them act like Lookout Chucks.

Chucks also appear in Lets-a-go, Mario as enemies. They attack in every way they do in Super Mario World, which includes charging, throwing baseballs, kicking footballs, and dividing into three Chargin' Chucks. The game also introduces the Chuck Suit as a downloadable power-up, which allows the wearer to defeat enemies from the side when running at full speed. Boss Chargin' Chuck is also the leader of the Chargin' Chucks in this game. 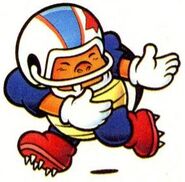 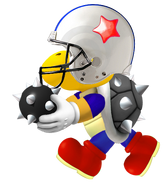 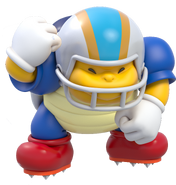