Start a Wiki
Chaos Mega System (also known as CMS) is a video game home console that Metal Chaos Inc. created to compete against the Xbox 360.

The Chaos Mega System console is a squared-like looking console with 4 grey plugs, two on each side (for the controllers).  It has a cartridge slot on the front and a red button (which turns on or off the console) on the top left corner in the front. On the top right corner it has text that reads "Chaos Mega System". The main color is sky-blue.

The controller has an analog stick on the left with along with an up, down, left and right buttons (looking like the ones on a Wii Remote) and has a similar shape of a SEGA Genesis controller mixed with an N64 controller. It also has an A, B, and C button at the right with a button in the middle at the top with a house icon. At the bottom of the analog stick has a stretched oval button with the word "select" carved on it. On top of the lettered buttons has another stretched oval button with the word "start" carved on it. There's a cube on top of the controller with a circular carving on top with a black wire inside that is about 1 foot and 5 inches tall and 6 inches wide. At the end of the wire is a black rectangle with a silver square plug on top of it. The controller's main color is red.

The cartridge is a similar look of a N64 cartridge except it's the same weight as a DS cartridge and it's 2 inches bigger than the N64 cartridge. The main color is red.

Most Derby Dash titles is on this console. A successor will be planned for the Chaos Mega System and continue the series on that console. 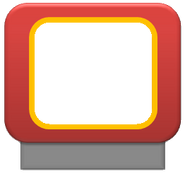 Retrieved from "https://fantendo.fandom.com/wiki/Chaos_Mega_System?oldid=2330766"
Community content is available under CC-BY-SA unless otherwise noted.