Chain Chomps are metal, dog-like creatures that appear as common enemies in the Mario series that come in varying sizes, often serving under Bowser. As their name suggests, they are usually restrained to chains. They will try to bite at Mario when he is nearby by lunging at him. They are typically invincible, though if the post their chain is attached to is broken by using ground pounds, they will be set free. When this happens, they can destroy obstacles or defeat enemies.

Unchained variants of Chain Chomps appear in multiple games throughout the Mario series; these are simply referred to as Chomps.

In the Mario Kart series, Chain Chomps appear as course obstacles that will flip over racers and make them lose all of their items. In Mario Kart: Double Dash!!, the Chain Chomp is a Special Item that only Baby Mario and Baby Luigi can use. Its function is similar to that of the Bullet Bill from Mario Kart DS onward, except the Chain Chomp doesn't provide invincibility, meaning the user is vulnerable to item attacks. Additionally, it may throw the player off the course once it abandons their kart.

Chain Chomps appear in Super Mario Allies as enemies. They act identically to Super Mario Odyssey; upon seeing Mario, they will lunge at him to damage him, and they are typically invincible. They can be Captured using Cappy, where Mario can pull back and launch them forward, destroying enemies and obstacles in the way.

Two other Chain Chomp variants also appear. Big Chain Chomps, which are larger Chain Chomps that are jet black rather than chrome blue, are much larger, and can cover more range and destroy more obstacles should Mario Capture them. Boiling Chain Chomps are extremely hot, and as such cannot be Captured with Cappy. F.L.U.D.D. must be used to cool the Chain Chomp off before it can be Captured.

Chain Chomp appears in Doodle's Super Smash Bros. as a newcomer, making it the second Mario series enemy to be playable after Piranha Plant. It is a heavyweight, and can use its chain for ranged attacks or its body for heavy damage.

Like Piranha Plant, Chain Chomp's attacks take reference from other Chain Chomp varieties. Its side special, Silver Roller, has it transform into a Silver Chomp from Super Mario Galaxy 2, moving across the ground slowly and burying any opponent it rolls over. Its up special has it transform into a Flame Chomp, with its chain becoming a string of fireballs as it leaps upward. The fireballs will damage opponents it hits.

Its Final Smash, Chomp Stampede, has it summon several Chain Chomplets from Super Mario Sunshine, as well as larger Chomps, to rampage around the stage and damage opponents. The attack ends with a Gold Chomp from Super Mario Galaxy, which deals the most damage and knockback.

In Super Smash Bros. for the arcade, Chain Chomp resumes its role as an Assist Trophy, lunging at nearby opponents.

The Chain Chomp is an item in Koopa Kart: Double Trouble!!, where it can be obtained from 5th to 10th place. It is Monty Mole and Popple's Special Item. It has the same function as in Mario Kart: Double Dash!!, except it's easier to control, as the player can move the Control Stick to align themselves.

The Chain Chomp returns in Koopa Kart Tour as Monty Mole, Popple, and Iggy Koopa's Special Item. It can be obtained from 5th to 10th place, much like in Double Trouble!!. It retains its function from said game. 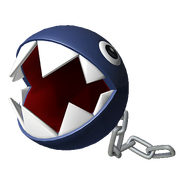 Mario as a Chain Chomp. 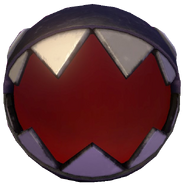 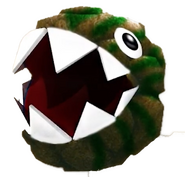 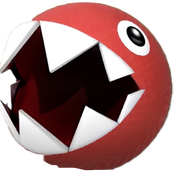