Cereal Loving Waddle Dee is the one actually lime-shaded Waddle Dee. He was born somewhere distant when there was an awkward silence At Castle Dedede. Eventually found without parents by Bandana Dee later and brought to Castle Dedede due to being abandoned by his real parents. His Real Name, which Bandana Dee gave to him, is Greeny Dee, however he likes to be called Cereal Loving Waddle Dee. He initially shows up in his own game called "Cereal Dee's Adventure" where it presents his detest for King Dedede. In Cereal Dee's Adventure, Cereal Loving Waddle Dee needs to take his cereal back that King Dedede stole as revenge against Cereal Dee for constantly terrorizing him. The in-game cutscenes also presents his like for Kirby and his many friends, where Cereal Dee asks his friends to help him get his cereal back, therefore, his friends are playable, In the cutscenes it uncovers Kirby And Waddle Dee's Friendship, and his friendships with his other friends. Cereal Loving Waddle Dee is faithful to Kirby, yet not to many others. He can be to a great degree insubordinate to any other individual and cause a lot of inconvenience and devastation.

Cereal Loving Waddle Dee is a spoiled brat who detests a lot of different individuals. Cereal Dee can bring about a lot of destruction, (Much like Kirby when controlled by the demon frog). Waddle Dee is extremely immature as well, as he talks back to a lot of characters that say something he doesn't like as well as tries his best to make all his enemies lives hopeless.

Bandana Waddle Dee - Enemies, but not, Bandana Dee adopted Cereal Dee as a younger sibling of sorts years back when Bandana Dee found him all by himself without any parents to speak of (after his parents abandoned him for being born differently colored) yet Cereal Dee repays Bandana Dee by going out of his own way to make Bandana Dee's life miserable every-time they have a disagreement or Bandana Dee beats him in video games or doesn't give him something he wants, no matter how hard it may be to acquire. (Such as Froot Loop flavored Ice Cream, which doesn't exist, or his Froot Loop themed sleep hat he wears and his toy hammer with a Froot Loop on it, both of which didn't exist until Bandana Dee commissioned it) Cereal Dee has even gotten Bandana Dee put in jail for jaywalking because Bandana Dee accidentally beat him in Smash while being forced to play as King Dedede so Cereal Dee can beat him as Kirby. Cereal Dee also often gets very jealous of Bandana Dee's friendship with Kirby.

Nacho Loving Waddle Doo - Best Friend, contrary to how Cereal Dee is often very mean, Nacho Doo is often very nice. Considering Nacho Doo's kind-hearted nature, Cereal Dee doesn't often get into arguments with him, if at all, similarly to Kirby. Cereal Dee likes Nacho Doo, considering him a pretty good friend, and him, Kirby and Nacho Doo to be a friendship trio.

Cookie Loving Poppy Bro Jr. - Getting Along Okay, Poppy can be annoying sometimes, which Cereal Dee isn't exactly tolerant of.

Drink Loving Wheelie - Kinda Getting Along, Wheelie can be mean sometimes, although that's not to say Cereal Dee isn't either.

Ninja-O Loving Bio Spark - Not Getting Along Very well, They have a lot of fights about which cereal is better.

Marx - One-sided enemies, Marx plays a lot of pranks and jokes around with Cereal Dee while Cereal Dee hates him, not only because he finds him annoying, but also because of how he doesn't trust Marx because of how Marx tricked Kirby into helping him get a wish from Nova by getting the Sun and Moon to fight. Marx often dismisses this as being "just a prank" and tells Cereal Dee to not be so sensitive. Marx considers Kirby and Cereal Dee to both be his friends, Cereal Dee because he likes to mess around with him and watch Cereal Dee get angry and tell him he hates him, while Kirby because Kirby keeps him well-fed and so he tries to stay on Kirby's good side by acting all buddy-buddy with Kirby so that Kirby would feed him extra. He often acts all buddy-buddy with Cereal Dee as well just because, and Cereal Dee hates it.

Magolor - One-sided enemies, similarly to Marx, Cereal Dee finds Magolor both annoying and doesn't trust Magolor due to Magolor tricking Kirby into helping him get the Master Crown and then proceeding to act all buddy-buddy with Kirby. Magolor often plays together with Marx and gets in on Marx's pranks and attempts to scam others into buying Gem Apples. Due to Cereal Dee hating on many others for past events and refusing to give them second chances, Cereal Dee is never tricked into buying any Gem Apples. Magolor tries to be all buddy-buddy with Cereal Dee as well and considers both Kirby and Cereal Dee to be his friends, which makes Cereal Dee hate him more. (Non "canon" inside joke, just can't help but include this joke) Cereal Dee, as well as Taranza, both consider Magolor a simp because of his love for Miyako, whom Magolor is madly in love with, making Taranza wonder why many consider him the saddest simp in existence instead of Magolor. Marx doesn't approve of Magolor's love for Miyako because him and Magolor are best friends forever and "best friends don't cheat on each other" according to Marx, due to not understanding that Magolor feels romantic love for Miyako rather than their normal friendship feelings.

Taranza - Enemies, Cereal Dee despises Taranza for his intentions to kidnap Kirby, although does like the fact Taranza kidnapped Dedede instead. Taranza doesn't like, nor care much about Cereal Dee, and like Meta Knight, often doesn't care or have time to stoop down to Cereal Dee's immaturity, often trying to ignore Cereal Dee.

Kibble Loving Sir Kibble - Enemies, Cereal Dee and Sir Kibble often have arguments over whether or not Kibble or Cereal is better, Cereal Dee saying that Kibble is gross and is only fed to pets. Sir Kibble, of course, doesn't care, and eats Kibble anyway, no matter what kind, and even made enemies out of Marx by constantly stealing his Marxy-Kibble that Kirby feeds him.

Carrot Loving Waddle Doo - Enemies, Cereal Dee hates Carrot Doo for a variety of reasons, such as the fact Carrot Doo claims to be special for extremely average things such as him liking dominoes or chess or monopoly or a variety of other board games and him liking carrots, pizza, cheerios and juice, yet not caring for bananas or froot loops or apples, as he is extremely egotistical. Given his massive ego, his best compliments are "You're almost as special and one of a kind and cool as me" and being extremely rude to anyone who ever objects these claims or tells him he's lame, and he claims that Shiver Star is flat, despite the fact Kirby was there and apparently told Cereal Dee "it was shaped like a big bouncy ball" rather than a disk. Due to Nacho Doo's kind-hearted and innocent nature, Carrot Doo often manipulates Nacho Doo into thinking he's cooler than he really is or that he really is special from everyone else and often manipulates Nacho Doo into believing his bogus facts, which infuriates Cereal Dee that Carrot Doo "takes advantage" of Nacho Doo's gullibility, although manipulation and taking advantage of Nacho Doo's innocent nature isn't Carrot Doo's intentions since Carrot Doo genuinely believes his own bogus stuff.

Meta Knight - Enemies, Cereal Dee has some Little Brother Syndrome of sort toward Meta Knight, having a one-sided competition to live up to Meta Knight's standards, often putting unnecessary amount of effort into trying to surpass Meta Knight in anything he does. However, his efforts are unnoticed by Meta Knight. He thinks he can beat Meta Knight really easily. Cereal Dee likes to call him Senior Noodle Arms as an insult due to not liking Meta Knight, also for the past, and feeling at competition with him. Meta Knight often doesn't care or have time to deal with Cereal Dee's immaturity and ignores him.

King Dedede - Worst Enemies, Cereal Dee hates how King Dedede is always Obsessed with clobbering Kirby, and how mean King Dedede is... In his eyes, because Cereal Dee over-exaggerates the heck out of King Dedede and makes him out to be way worse than he really is, regardless of any redemption Dedede may do over the years, Cereal Dee still despises him for the past.

Cereal Loving Waddle Dee's only friends other than Kirby are Nacho Loving Waddle Doo, Ice Cream Loving Galbo, Ninja-O Loving Bio Spark, Drink Loving Wheelie, Cookie Loving Poppy Bro Jr and Pasta Loving Chilly. His closest companions out of every one of his companions are Kirby and Nacho Loving Waddle Doo, the others are in no particular order. Cereal Dee often has trouble making friends due to his spoiled personality, causing many to not like him very much, with his first friends being Kirby and Nacho Doo because they were nice enough to befriend him, despite his flaws, although technically his first friend would be Bandana Dee, but that's more of a different thing since Bandana Dee adopted Cereal Dee.

This Is A Picture of Waddle Dee and His Friends 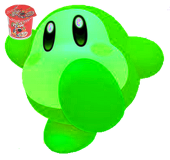 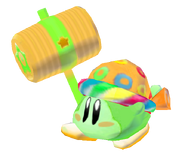