Cathy first appeared in World 8-4 of New Super Mario Bros. Wii. She fell down a deep mineshaft (or "off the high dive") with Mario, Luigi, and the two Toads, into her Bulber- and Jellybeam-infested "pool" (really a dark underground lake). Cathy got her friends to help the four heroes by lighting up the following area and taking out the nearby Stone Spikes.

In Umbrella Waffle, her first official appearance, Cathy serves as a Companion Cube-like character throughout the game. She never speaks or moves of her own volition when the camera is focused on her, but she does defeat several Splicers members off-screen. Late into the Story Mode, the player uses her to infiltrate a section of the Splicers' base while the power is out.

Cathy is bioluminescent, constantly emitting light that makes it easier to see in dark environments. She is also skilled at combat, but prefers not to show off when too many people are watching. When thrown at many enemies, she can defeat them instantly.

However, despite owning a very large "pool", she is terrible at swimming.

Cathy appears in Nintendo & Fantendo Play: Dodgeball! as part of the Green Faction, the team consisting of Nintendo fan characters. 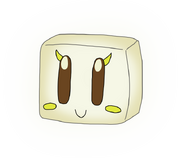