Start a Wiki
“Who I am? I am no one. I am the one that I'm mimicking. Outside that, I'm just a living weapon.”
— Cass


Cass Ayers (also known as Cassandra Ayers or Cassidy Ayers) is a genetic human. Created in a lab to be able to modify its body to be physically genderless, allowing Cass to modify her body to mimic others without having any problems. Although Cass can mimic the body of anyone, Cass was trained to utilize mainly two forms, known as Cassandra Ayers and Cassidy Ayers, based upon the world's most deadliest agents. 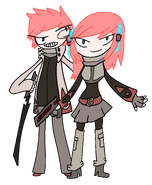 Retrieved from "https://fantendo.fandom.com/wiki/Cass_Ayers?oldid=3210655"
Community content is available under CC-BY-SA unless otherwise noted.