The Cascade Kingdom is a prehistoric, stone age inspired location featured in Super Mario Odyssey. It is the greater location of Fossil Falls and appeared as the second kingdom in Super Mario Odyssey. It's main landmark is a waterfall flowing out of a giant Triceratops skeleton. The regional currency is purple wheels and does not have any friendly residents of it's own.

It also appeared in Super Wario Odyssey, albeit with a different greater location of Amber Glade. This location featured Triceratops and T-Rexes, along with a amber-trapped boss known as the Woshisourous. It keeps the regional currency and it's residents remain the same.

Mario and Cappy use a electrical power line to travel to the Kingdom from the Cap Kingdom, in order to find The Odyssey. While they were able to find it buried in the Cascade Kingdom, it required Power Moons to get operational. This Kingdom was attacked by the Broodals' leader Madame Broode and her golden Chain Chomp Chain Chompikins. When Mario defeated her, peace was restored to the Kingdom.

There are a total of 50 Cascade Kingdom Wheels

in the kingdom to collect. They can be exchanged at the Crazy Cap store that appears that is operated by two Bonneters when Mario returns to the Kingdom, as they operate in the spot that the Odyssey was located in.

Fossil Falls features a wall created entirely out of fossils and stone and can be broken by the launching of a Chain Chomp, although mysteriously regenerates after a while. Something appears to be buried inside, but visitors should be aware that they should only go in if they dare.

The only creatures that appear to be native to the Kingdom are possibly the T-Rexs that appear in the Kingdom. One sleeps in the main area, while others appear in sub-areas. Cappy notes that it is impossible to hold onto a T-Rex as a capture target for any longer time than permitted due to it's sheer mass.

Chain Chomps, Burrbos, and Koopa Troopas may be native to the Kingdom, although they may have been planted there by Bowser and the Broodals. A Dry Bone's skull appears as one of the Crazy Cap's store items, although no actual Dry Bones can actually be seen in this kingdom, appearing much much later in the game.

Cascade Kingdom returns in Super Wario Odyssey, albeit with a new location called Amber Falls. Amber Falls is said to be where most the dinosaurs were inadvertently preserved in amber and is basically a sticky amber swamp with a solidified amber mountain as it's centerpiece, with a Woshisourous trapped inside.

Mario, with the power of Cappy, as a T-Rex 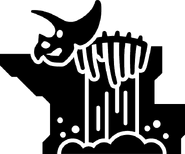 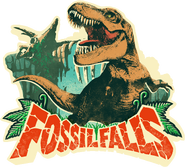 The sticker for Fossil Falls 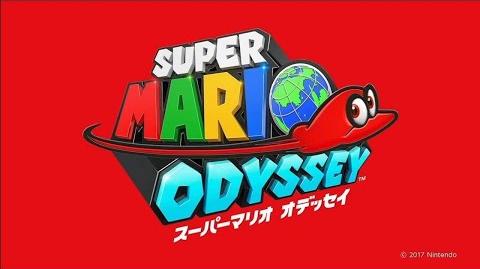 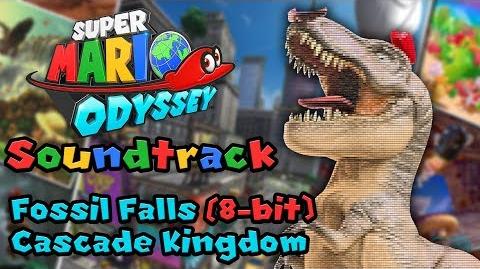 Retrieved from "https://fantendo.fandom.com/wiki/Cascade_Kingdom?oldid=2959739"
Community content is available under CC-BY-SA unless otherwise noted.