The Carrot (alternatively referred to as Bunny Ears or Rabbit Ears) is an item in the Super Mario series of games. Its first appearance was Super Mario Land 2: 6 Golden Coins.

The Carrot transforms Mario into Bunny Mario, allowing him to hover in midair and slow his descent.

The Carrot resembles a normal carrot with eyes and four stalks. In Mario Kart Arcade GP DX, they do not have stalks but instead rabbit ears on the top of their stalks.

The Carrot appears as a power-up in Super Mario Finale. In order to unlock the Carrot Blocks in the overworld, Mario must travel to the Terra Mesa area and activate the Carrot Switch. Carrots appear like they did in Super Mario Land 2: 6 Golden Coins albeit in three dimensional form. Like the other power-ups in the game, they are instantly absorbed by Mario after he hits their block. 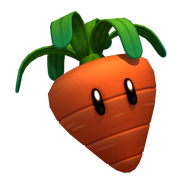 Another fan 3D rendering of the Carrot (by Peardian) 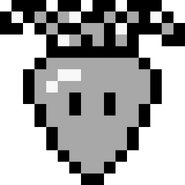 The sprite of the Carrot used in Super Mario Land 2: 6 Golden Coins 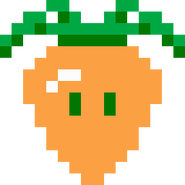 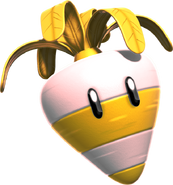 Invincibility Carrot. Original image by Peardian; edited by AgentMuffin (t∣b∣c)
Add a photo to this gallery

Retrieved from "https://fantendo.fandom.com/wiki/Carrot?oldid=2772926"
Community content is available under CC-BY-SA unless otherwise noted.