Captain Toad is a sort of jack-of-all-trait type character but has some glaring advantages and disadvantages. For his advantages, he has widely mixed amount of attacks that help with his approach options and has some decent killing moves. He has projectiles as well as attacks that brings him closer to his opponents like the Mine Cart. He can attack from far away with the Turnip Launcher. He is fairly fast and could be considered as being above average in terms of speed. He is able to pack his backpack with items and turnips which weighs him down. His Custom Set A Backpack is helpful in storing and getting rid of items easily from the pack thus making it best suited for intense and quick battles. However, he is dependent on items being available or that the opponent produces projectiles/items. His Custom Set B Pluck Patch is a bit more complex and doesn't allow him to unpack and pack on the fly but requires a bit more to unpack it. This attack is more situated for spacing options and he does not have to worry about finding items. By packing his backpack, Captain Toad can increase his weight thus increasing his falling speed and launch resistance. This allows him to weather attacks that may KO him if left unpacked. However, his jumping and speed stats drop steadily the more he packs it in thus making him a big target.

A flourished remix of the "World Clear" for Captain Toad Treasure Tracker.

The Starshroom jumps up with boosts of fuel.

Captain Toad slightly leans back while holding his backpack straps and dashing forward.

Captain Toad lies on his back with his hands folded on his chest. A bubble blows out of his nose.

Trips and lands on his butt.

Balances with both legs and swings back and forth while holding his helmet.

Swings the bat with both hands.

Slams into the screen with his eyes open and mouth agape.

Captain Toad's trophies can be earned by completing Classic Mode, Adventure Mode, All-Star Mode, and Boss Battle mode. In addition, further trophies can be found during matches and at the Trophy Shop.

Captain Toad and Toadette (Up) Yellow/Cyan 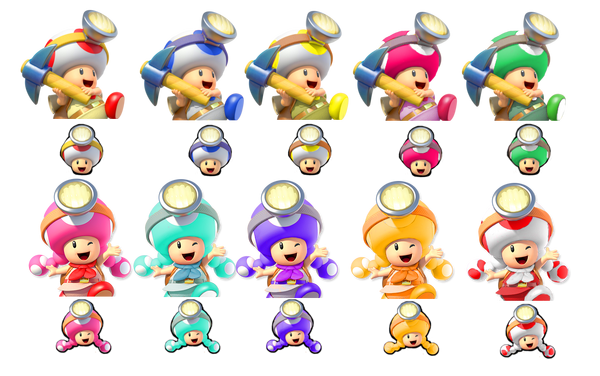 "In Search for a Smashing Treasure"

Time: 2:50 Scene: a floating island with a maze-like configuration.

The main theme of Captain Toad Treasure Tracker plays against a black background. A circle opens up and shows the scenery as a back drop. Captain Toad and Toadette are seen navigating through this island's maze and obviously heading for the Power Star at the top of the stage. They manage to get past the Shy Guys and Goomas while climbing over blocks and other obstacles. They finally reach the top and Toadette runs to grab the Power Star. However, as she hoists it proudly above her head; a dark shadow looms over here and she looks up. Captain Toad falls back with shock and points his finger upwards.

Ridley swoops down and captures both Toadette and the Power Star. He looks down at Captain Toad, screams, and takes off into the sky. Toadette's scream fades away as fade away into the sky. Captain Toad looks scared and sad at first but, he looks at where the Power Star was and back to the sky. He clenches his fist and punches upwards thus queuing the "Captain Toad" splash art sequence. The scene then transitions to a distance shot of the island with Captain Toad summoning the Starshroom and blasting off towards Ridley and Toadette. He spots them some distance away and ignites his booster which causes him to blast off. Captain Toad manages to catch up to them with Toadette; still cluthing the Power Star, giving out a joyful yell. Ridley turns his head and screams at the Starshroom and knocks it with its tail.

Toadette gasps as it plummets into the clouds below but, from above, Captain Toad appears and lands on top of Ridley's back. He begins pulling out Turnips and Super Gems and tosses them at Ridley's head. Ridley's flight pattern wavers as he is trust continuously by these items. Captain Toad is about to take his pickaxe to Ridley's head but Ridley suddenly bucks Captain Toad off. Captain Toad begins to follow downwards as Toadette yells and reaches out her hand. Captain Toad does as well but, to his horror, they miss and he falls down. The next shot is of Captain Toad's perspective as he watches Ridley and Toadette become smaller and smaller.

The next shot is from far away and shows Ridley flying while Captain Toad descend past the clouds. However, a bright blur light flashes into the sky causing Ridley to stop and turn as he shields his eyes. Emerging from the sea of clouds is Captain Toad on top of Draggadon. Ridley clutches his free fist and screams at Draddagon who answers with a massive blast of flame which scorches all of Ridley except for TOadbette. Ridley, comically, is charred to black with smoke rising up after the inferno. Ridley falls down into the clouds; letting go of Toadette and the Power Star. Before she falls to her doom though, Captain Toad manages to grab her hand and pulls her to safety. They both give each other a hug and then hold up the Power Star; laughing. This cuts into the actual game play:

The scene then cuts to the Super Smash Bros. 5 logo.

Afterward, it cuts to Ridley laying on the ground; burnt to a crisp and smoking but very much alive. Bowser, Ganondorf, Kamek, and Wolf look down at Ridley with shake their heads as if disappointed. Bowser grabs Ridley's tail and drags him along.

Retrieved from "https://fantendo.fandom.com/wiki/Captain_Toad_(Smash_5)?oldid=2176687"
Community content is available under CC-BY-SA unless otherwise noted.