Captain Toad: Lost Adventure is a 3D puzzle platformer developed with the assistance of Nightcap Devs. for the Nintendo Switch.

The game takes place in the Lost Kingdom, where the Toad brigade is on yet another treasure hunt. Captain Toad and Archivist Toadette can be seen carrying some treasure and a couple of Power Moons back to the Starshroom. They then place all of their treasure inside the Starshroom. Satisfied with the amount of treasure they found,they exit the Starshroom in order to take a break.

As they sit down and relax near a campfire, Wingo appears and lands right on the Starshroom. He then starts flapping his wings and slowly lifting the Starshroom with it's legs. The Toad Brigade quickly runs towards the Starshroom, but they don't make it in time and Wingo manages to get away with the Starshroom and all of the treasure in it.

Hint Toad shows Captain Toad a map of the island where Wingo is heading. Now knowing the location, Captain Toad and the rest of the Toad Brigade waste no time giving chase.

Captain Toad (Or Archivist Toadette if you used her during page 20)  will throw his final turnip and causes Wingo to fly back a bit in a dizzy way. Archivist Toadette (Or Captain Toad) again, depends on who you use during this mission) and the rest of the Toad Brigade arrives at the top of the tower. Wingo will fly down and grab the Starshroom while chuckling at the Toads. He then charges up a giant fireball before launching it at the Toad Brigade, knocking them off the tower.

Captain Toad (Or Archivist Toadette if you used her during page 20)  will walk towards the unconscious Mage. Captain Toad then looks out of the window of the lair and sees Wingo escaping. Mario then flies in front of the window with his plane and motions the Toads to get on. Once the Toads do, they start flying towards the direction Wingo has headed.

The Episode begins with Archivist Toadette walking around in a forest. She looks up and sees Klepto flying towards the end of the path with Treasure in it's talons. Toadette gives chase to Klepto and enters Page 1.

After clearing Page 1,Toadette manages to get her hands on the treasure. This treasure turns out to be the Super Crown. Toadette slowly puts the crown on and starts glowing. Once the light around her clears,she looks down and sees that she transformed into a princess that looks like Princess Peach. She then notices some sparkles under her legs. She jumps up and slowly falls down thanks to the sparkles. Wanting to see what else the crown can do,Toadette starts running forward for a new Adventure.

This game takes place in the Lost Kingdom and plays like Captain Toad: Treasure Tracker. The game is about exploring your surroundings and solving puzzles in order to reach the Power Moon. Once again, all the equipment in Captain Toad's backpack prevents him from jumping, so he'll need to rely on Power-Ups in order to take down enemies.

The main campaign can also be played with an extra player. The second player will take control of Toadette and they can work together to solve the puzzles in order to reach the Power Moons. Similar to Super Mario 3D World, you will earn points depending on your actions. And whoever has the most points when the Power Moon is grabbed wins a crown.

Page 1: The Start of a New Adventure!

Page 3: The Purple and Poisonous Path.

Page 9: Gliding Past the Bullet Bills.

Page 15: Running from the Poison Wave.

Page 17: The Crash Site of the Torch Bros.

Page 20:Showdown on Wingo's Tower.
Add a photo to this gallery

Page 1: The shore of the Abandoned City.

Page 9: Glydon in the Sewers.

Page 11: Going Through the Poison with Velena.

Page 13: Clear Pipes Above the Poison.

Page 20: Showdown with the Fauster Mage.
Add a photo to this gallery

Page 1: Entrance to the Castle.

Page 2: Getting Past the Spiked Hall.

Page 4: Super Pickaxe under the Castle.

Page 5: Minecart in the Castle.

Page 6: Marching Past the Goombas.

Page 7: Cells under the Ground.

Page 9: Glydon in the Castle.

Page 10: The Fountain of Poison.

Page 12: Bridge of the Bullet Bills.

Page 22: Around the pillars with Mummy-Mes.

Page 23: On the tree with Ant Troopers.

Page 25: Cobrat Bullet Hall.
Add a photo to this gallery

Page 2: Jumping over the Poison with Peachette.

Page 3: Bullet Bills above the Poison.

Page 7: Looking for the Hidden Guys.
Add a photo to this gallery 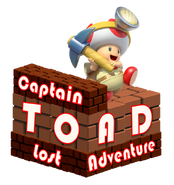 The logo of the game 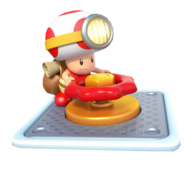 Captain Toad near a Spinwheel. 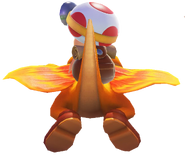 Artwork of Mario and Captain Toad on a plane. 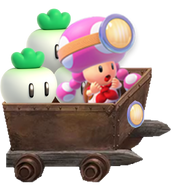 Archivist Toadette inside a minecart.

Sleeping Toad standing.
Add a photo to this gallery

The level select screen.
Add a photo to this gallery

Retrieved from "https://fantendo.fandom.com/wiki/Captain_Toad:_Lost_Adventure?oldid=3275989"
Community content is available under CC-BY-SA unless otherwise noted.