Captain Syrup is a female pirate who acts as the rival to Wario in the Wario Land series. She originally appeared in Wario Land: Super Mario Land 3 as the final boss and reappeared in Wario Land II as a main villain. She did not reappear in the series until Wario Land: Shake It!! where she acted as the role of shopkeeper, although she steals the endless money sack from Wario at the end of the game.

Captain Syrup is a pirate captain who rivals Wario in greed, often stealing from him or stealing from others. She can be occasionally flirty, but is mostly sneaky and doing things of her own accord and desires. She usually acts in her own self interest or to humiliate her rival Wario in some way. While Wario rescued Captain Syrup in Wario Land II, it was mostly out of his own self interest.

Captain Syrup appears as an unlockable character in Super Smash Bros. Blue Heat. Her first appearance in the series, she sports some effective kicks and punches, along with crazy special moves, too.

Surprisingly Captain Syrup appeared for the first time in a Mario game. She plays hockey with other Wario Series characters like the Shake King and Queen Merelda.

Captain Syrup will make her debut in the Mario Kart Series in Mario Kart 9. She will be an unlockable character, and will have a role in Story Mode.

Captain Syrup appears in Mario Super Party as an Ally.

Captain Syrup makes her debut in a Mario platformer in Lets-a-go, Mario. She is a somewhat major villain and first appears in the Aqua Area. Her ship, the SS Teacup is seen heading towards the heroes and the tower. When the ship arrives, she sends a Goom to rob the tower of its Ancient Treasure, the Glistening Pearl. As the ship leaves, the crew just barely makes it on, thanks to some nearby Propeller Blocks and native Balloon Baby Yoshies.

When they make it to the crow's nest of the ship, they finally meet her. She then has a long conversation with Wario about her intentions. She then fights Wario in the Syrup Machine I. When she is defeated, the explosion causes a shipwreck, which nearly kills the heroes. Captain Syrup and her shipmates escape.

Later, in the Spelunk Area, she drills her way down to where the crew is in the final level. However, the ceiling is falling during this battle, giving the player a limited amount of time, so much so that it's impossible to defeat her without cheating. However, the ceiling eventually destroys the machine and nearly crushes Captain Syrup as well. However, she is saved because of Mario and Luigi, when they stack on each other to hold the ceiling up. However, Captain Syrup shows no signs of being grateful during this, as she just flies away in her UFO.

She reappears in the Freezing Area, again as a boss, this time in the middle of the area. This time, she patrols a giant snowman robot that resembles a Mr. Blizzard. When she is defeated, she again, flies away in her UFO.

Captain Syrup appears as a boss in World 7, Sour Skies, in Super Mario Bros.: The Lost Worlds. She pilots a airship that shoots Bullet Bills and Bullet Goombas at the player, occasionally shooting at them with a Pink Koopa Shell. The player must redirect the Pink Koopa Shells back at the air ship three times to defeat her.

Captain Syrup appears as a starting racer in Mario Kart: V² Circuit. She is a heavyweight with a medium size. She has great speed, poor acceleration, slightly above good handling and slightly above poor traction.

Captain Syrup in 3D by Nutta. 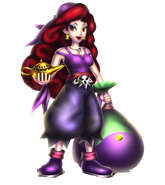