Captain Douglas Jay Falcon is a 37-year old F-Zero pilot from the F-Zero series, hailing from the city of Port Town. In some games he is described as a mysterious racer who is adored by many viewers of the tournaments; in others he is a bounty hunter. Regardless of the continuity, however, he is popular among F-Zero fans, and thus considered the main protagonist of the series (albeit unofficially).

He was originally designed as a mascot for the Nintendo Entertainment System, but didn't gain a lot of popularity. However, his playable roles in the Super Smash Bros. series have cemented his status as a familiar Nintendo character over the years.

Captain Falcon rides the Blue Falcon, which is his car in the F-Zero series and is his Final Smash in the Super Smash Bros. franchise.

Captain Falcon is the final character in Punch-Out!: VR to face in Little Mac's Last Stand as the Nintendo League champion, like Donkey Kong was in Punch-Out!! for the Wii.

Captain Falcon is a returning veteran in SSBUF. He confirmed to appear on May 29, 2018 along side the rest of the original 4 unlockables.

Captain Falcon, like all characters from the original Super Smash Bros. title reappears in Jake's Super Smash Bros. once again as a playable fighter. Unlike many veterans, who have received changes in order to make them more-faithful to their series of origin, Captain Falcon's moveset remains unchanged. As with all his previous appearances, Captain Falcon's special moves consist of Falcon Punch, Raptor Boost, Falcon Dive, and Falcon Kick, with his vehicle from the F-Zero series, the Blue Falcon, appearing as his Final Smash. Captain Falcon has a new alternate costume based upon his appearance in the original F-Zero title's manual, and also has Rick Wheeler as an alternate costume.

After making a number of cameo appearances in the Mario Kart series, Captain Falcon appears as a playable character in Jake's Super Mario Kart. In addition to Captain Falcon becoming playable for the first time in the series, his Blue Falcon vehicle, which previously appeared in Mario Kart Wii, Mario Kart 8, and Mario Kart 8 Deluxe, returns as a vehicle part.

Captain Falcon, as he appears in Super Smash Bros. Melee 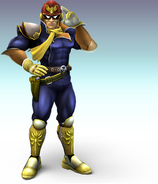 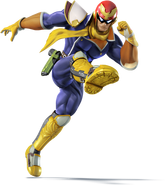 Captain Falcon in Super Smash Bros. Wii U and 3DS 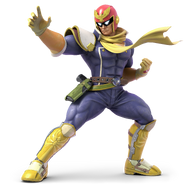 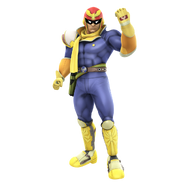 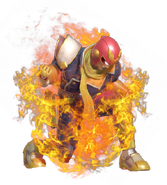 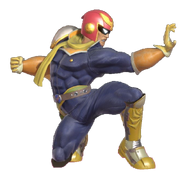 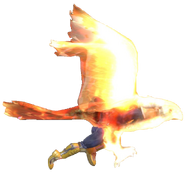