Captain Charlie is a character from the Pikmin franchise, first appearing in Pikmin 3 where he is one of the main playable characters.

Captain Charlie was sent to PNF-404 on a mission to bring back food to his homeplanet, Koppai. Since the mission, he retired as a space ranger and is revered as a hero of Koppai. Alph even describes him as "one of Koppai's greatest legends"

He wears a spacesuit with a green lapel and a star-shaped badge on its left side. He has an average-sized nose, a dark brown mohawk and a tiny mustache, and like Alph, has eyes that are wide open at all times. His skin is also the most tan out of the three explorers, and serves as the captain of their space-faring vessel, the S.S. Drake.

He also takes a rubber ducky with him on every mission for good luck.

Captain Charlie appears as a payable character in Super Smash Bros.: Going for Gold, and is a clone of Alph. 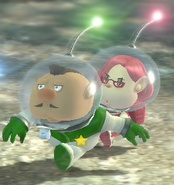 Captain Charlie being followed by Brittany 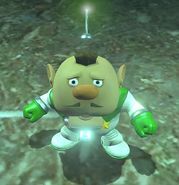 Charlie after being rescued from the Vehemoth Phosbat
Community content is available under CC-BY-SA unless otherwise noted.
Advertisement