This article is about a Mario series character. If you were instead looking for a mushroom character, try Cappy (Kirby).

Cappy is a character introduced in Super Mario Odyssey. He is a Bonneter, a ghostly hat creature, that acts as Mario's travelling companion and transforms into his hats. When thrown at certain entities, Cappy grants Mario the Capture ability so he can possess the Capture target and use their abilities.

Cappy's appearance is a white top hat with red eyes, a tuft of blue hair, and a main body that somewhat resemble an Eerie. When he possesses other hats, only his eyes pop out.

Cappy is able to possess enemies and objects through a method known as Capture. However, he cannot do this to enemies or objects wearing hats until their hat is first knocked off. Cappy can also be thrown as a projectile and collect coins in midair, but not Power Moons. When Cappy hovers in place, Mario can bounce off of him like a trampoline for increased jump height and distance.

Not much is currently known about how Cappy met Mario, although it has to be from near the start of the game. He is "energetic but a bit timid." Cappy acts as the main addition to the gameplay of Super Mario Odyssey; Mario can throw Cappy as a projectile to knock away enemies or grab coins/currency (although Cappy seems unable to get the Power Moons). He can also "capture" enemies, objects, and NPCs and allow Mario temporary control over them and their powers. Enemies wearing a hat must have it knocked off their head before Cappy can Capture them.

Cappy returns as Mario's partner in this game, with the same abilities he had before. He is unique among the Bonneters for being the fastest to Capture objects and targets.

Cappy reappears in Silver Spurs Omicron as an ally to Old Mario, who finds him in the Ruined Kingdom and enlists his help to stop Mephiles the Dark and find his father.

Cappy appears in Super Mario Spikers as a playable character, appearing as a Power-type Captain. In order to compete in the Spikers League, Cappy Captures a T-Rex, which allows him to move around the court and attack opponents. This T-Rex will also spike balls for him. His emblem is a silhouette of Top Hat Tower, and his theme is Grunge.

Cappy reappears in the sequel for Super Mario Odyssey, retaining his role as Mario's hat, granting him the ability to capture enemies and objects.

Cappy and his sister, Tiara, reappear in this game. After the player crowns 5 minigames, the Bonneter in charge of the Bonneter Mingame House will ask them to wait for a second, because they were outstanding and he needed to report to his boss. After leaving momentarily, Cappy and Tiara come out of the back and congratulate Mario and co., saying he didn't know they were there. After Tiara whispers something to him, he whispers back, "Good idea." and they decide to join Mario and co.

Cappy appears as a unlockable racer in Mario Kart: V² Circuit. Like the rest of the characters, he can be unlocked randomly by placing first in a Grand Prix on any engine class. Alternatively, he can be purchased at the shop by collecting Coins. He is a lightweight with a small size. He has average speed, below average acceleration, good handling and above average traction.

In this show's 46th season (the season that Super Mario Odyssey was released in), Mario's side special was changed to involve Cappy, replacing his Cape from the actual Smash Bros. games. Cappy is also involved in his side taunt (which also appears in Smash Bros. Ultimate). 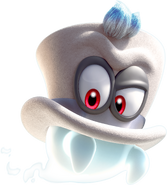 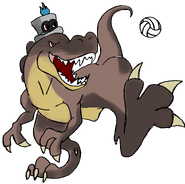 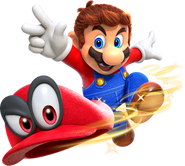 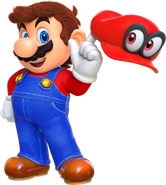 Mario holding Cappy on his finger 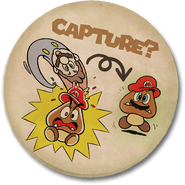 Mario capturing a Goomba with Cappy. 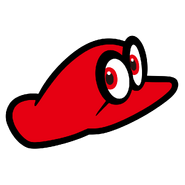 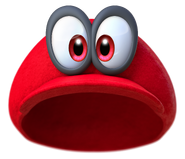 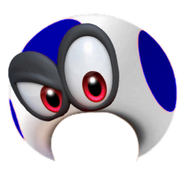 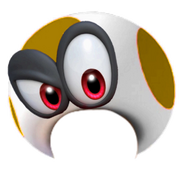 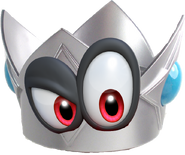 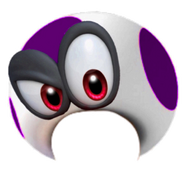 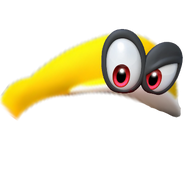 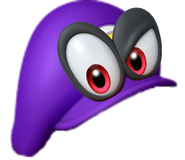 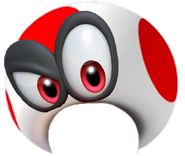 Mario as a Goomba

Mario as a Chain Chomp

Mario as a Bullet Bill 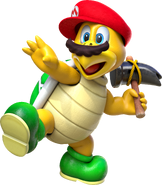 Mario as a Hammer Bro 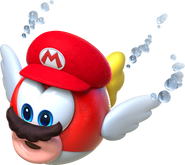 Mario as a Cheep Cheep 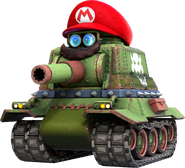 Mario as a Sherm

Mario as an Uproot

Mario as a T-Rex

Mario as a Volobono Lava Bubble.

Mario as a ball of lightning 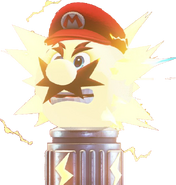 Mario as a ball of lightning (Spark Pylon)