She was given a very flirty personality in her music shop and her love affair with pink continued. She has not been as flirty as she was in Donkey Kong 64 since. She still makes regular appearances in most Donkey Kong titles.

Candy Kong is set to appear in the upcoming game, [[Mario Star League Baseball]]. She's an average batter and pitcher. Candy shares good chemistry with all the other Kongs.

In Donkey Kong Continent, Candy lives in her Pink Sugar Palace in the Northern Kremisphere. At first she does not do anything except brag about her new castle. However, if you collect her Headphones hidden throughout the levels and bring them to her, she allows you to use her old Save Barrel. You can also pay her Banana Coins to unlock songs to listen to under the "Options" screen.

In the Wii boxing game Donkey Kong Knockout Candy Kong is not playable however she appears in the background of the option screen, pointing towards the selections. She is also seen cheering in the crowd amongst various gibbon monkeys and animal buddies. When Donkey Kong loses a match she runs towards the ring.

Candy Kong appears as a playable character in the multiplayer Wii racing game Donkey Kong Racing. She appears as part of the Kong category.

Candy Kong is a player on the Donkey Kong Wilds team on the multiplayer Wii sports game Mario Rugby League. She is the fastest character on her team with good skill but poor strength. Her special skill is to send out a sound wave emitting from the tambourine as an extended tackle. 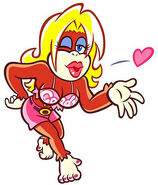