Start a Wiki
Camilla (カミラ Kamira) is the second eldest child of the Nohrian royal siblings. Camilla is also considered a princess of Nohr, with Selena and Beruka as her personal retainers. She debuted in Fire Emblem Fates.

Camilla can be described as motherly, especially around her younger brother/sister Corrin. She treats them not as an adult, but rather like she would around a small child. This is most notable in her speech, as she tends to talk down to them as if she were talking to a child. Camilla also tends to identify discomforts that Corrin isn't necessarily experiencing in a bid to offer them her assistance. She has been known to threaten death upon people whom she perceives will bring her brother/sister Corrin grief.

This is not exclusive to Corrin either, as she tends to treat her younger siblings as if they were her children. This isn't nearly as intense as the way she treats Corrin, but it still rather present. She is a family-oriented person, one who values the maintenance of a strong relationship with the people whom she recognizes as her family. This is reflected in most of her endings in Fates, where she drops the royal title to become a loving mother to a family.

This maternal yearning and reflection likely comes from the fact her own mother was a warish cocumbine who often used her for her own advantage. This is likely why she cares for the parent-less Corrin so much.

Camilla adopts a completely different persona when she interacts with others, where she is portrayed as a figure of maturity and elegance. Camilla has also been depicted as ruthless and bloodthirsty on the battlefield, deriving disturbing amounts of joy from striking down her enemies with wild abandon. While she is not without the capacity to show mercy to her foes, Camilla usually only does so on the behest of Corrin. She tends to be the most cruel to Hinoka, although in Revelations, she tends show a quite kinder disposition and looking ways to connect. She also enjoys bathing.

Camilla is the child of King Garon and an unnamed concubine who also had fathered Leo and Elise. Corrin was adopted into their family, although their parents are entirely different. Despite this, Camilla sees them as part of her family.

Camilla has a "Spring Festival" variation in Fire Emblem Heroes. This Camilla uses a green egg to cast green magic. She rides on a Wyvern, maintaining her flight status. There doesn't seem to be much background on this version of Camilla aside from her liking the outfit because Corrin said it looked cute.

Camilla has the Dragon's Vein power granted from her bloodline, able to activate Dragon Veins spread across the world to shift the tide of battle and to change the world in a literal sense. She is a Malig Knight at the start of the game and rides on a Wyvern, using an axe to battle. She can also use a thunder tome to cast thunder magic.

Artwork of Camilla from the 4koma Book

Camilla in a neutral stance in Fire Emblem Heroes 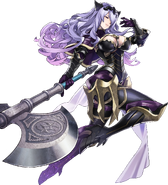 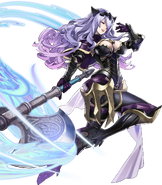 Retrieved from "https://fantendo.fandom.com/wiki/Camilla?oldid=3121010"
Community content is available under CC-BY-SA unless otherwise noted.