Cactuar (Japanese: サボテンダー Sabotendā) is a creature from the Final Fantasy series, created by Square Enix. They look like cacti, they have faces, they're bodies are slanted, they have three quills at the top of their heads, and they have stiff arms and legs. However, some rare Cactuar have segmented limbs.

Cactuar appears in Mario's Batter-Up Baseball. He has good chemistry with Moogle, Slime, Chocobo, and Tonberry, 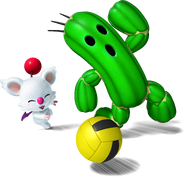 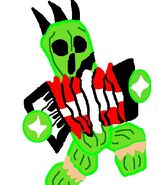 Cactuar, with his accordion
Community content is available under CC-BY-SA unless otherwise noted.
Advertisement