Cackletta was the main villain in Mario & Luigi: Superstar Saga. In that game, her motive was to steal the Beanstar and use its wish-granting powers to take over the world, coming the Mushroom Kingdom with her lackey Fawful disguised as the Goodwill Ambassador to steal Princess Peach's pure voice to awaken it. Later in the story, it was revealed that they stole Birdo's voice instead of Peach's, and was defeated by Mario and Luigi in the Beanbean Kingdom's Woohoo Hooniversity. She is, however, saved by Fawful, and possesses an unconscious Bowser's body to create Bowletta. At the end of the game, Mario and Luigi defeat her in her spiritual form inside Bowletta's body, causing it to leave Bowser's body and disappear into the afterlife.

Cackletta, along with Fawful, are set to appear in the first season of Super Mario Revival as two of the many villains revived by King Polarite. They are notably less powerful than they were in the original games they appeared in, and are seen as henchmen to King Polarite rather than main villains themselves. Even so, they are quite formidable opponents. Cackletta and Fawful only appear in episode 04, "Witch's Revival".

Many of Cackletta's attacks in the anime are moves she used in Mario & Luigi: Superstar Saga, but are given names:

While Cackletta has not made an actual appearance in the story, she was mentioned by Birdo on at least two occasions. In the thirteenth chapter, Birdo stated that she could not understand how Princess Peach was always so unprepared for Bowser's numerous kidnappings of her, despite being able to predict Cackletta and Fawful's arrival during the events of Superstar Saga. In Part 15a, Birdo, upon seeing Antasma for the first time, mistook him for Cackletta.

"Cackletta is a witch who once nearly took over the Beanbean Kingdom. Now she has enslaved all of Bowser's minions to do her bidding throughout the Mushroom Kingdom. She is actually kinda pathetic in comparison to 2003." -Luigi's Tell Ability

She doesn't make of an appearance in this game. She's only the first boss you face. She's really only in the game for trying to take over Bowser's minions while Peach's Castle is destroyed and Bowser has to make sure Peach doesn't get kidnapped by others.

Although she is rather comical, Cackletta is extremely selfish, and having a stereotypical witch-like personality. Her only example of compassion is for her beloved minion, Fawful. She will do anything to eagerly get what she wants, such as flying directly from her homeland to stir trouble, and swipe the voice from Princess Peach in order to awaken the Beanstar for her own personal gain. She even attempts as far destroying the Beanbean Castle, the capital of her own home, to swipe the artifact. From beginning, to midway, Cackletta easily gets tricked twice, meaning she could be easily gullible or plainly fueled by her highly self-absorbed attitude, especially prone to getting angry at her own mistakes.

Since being destroyed and revived, however, she has shown a change of heart. She has become best friends with the Colon Sis. as well as Fawful and Midbus. She still holds a small grudge against Mario, but for whatever reason, has nothing against Luigi.

After she is revived by King Polarite, Cackletta remains as mean and nasty as she was in Mario & Luigi: Supertar Saga. However, she is more of aware of the Mario Bros.' potential and does not underestimate them. She understands how powerful they can be, so in turn, she tries to grow even more powerful in order to destroy them. 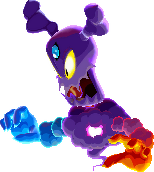 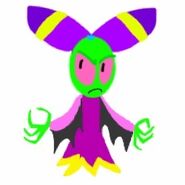 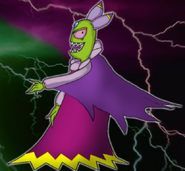 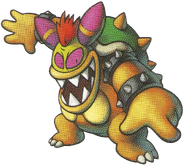 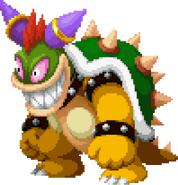