Start a Wiki
Byleth Eisner is the main protagonist of Fire Emblem: Three Houses, its gender is determined by the player at the beginning of the game.

Byleth has a very subdued personality and has difficulty expressing emotion. Even as a newborn, they neither laughed nor cried. People they are especially close to, such as Jeralt, are able to tell how they are feeling despite their limited emotional visualizations. A handful of their students note that their outward expressions hardly vary. Some express surprise whenever they simply smile. According to Alois, this trait of theirs may in part come from their father, as Jeralt does not show his emotions easily either and can also be difficult to read. Due to Jeralt keeping out a lot of information about the world, they are curious about the influence of the Church of Seiros, the mystery of the Crests, and the dynamic of the three nations.

Their stoic demeanor slowly changes over the course of the Academy phase. Jeralt notices that they have become more expressive over the first few months, likely a result of the bonds they have formed with their students. Despite appearing indifferent, Byleth can be perceptive of their students and fellow faculty's problems and serve as a great source of emotional support for their issues. As the story unfolds, their emotions become more dynamic including feeling true sorrow, vengeance, and happiness.

Byleth has somewhat of a reputation from their earlier years in their father's mercenary corps for being a fearless and skilled warrior. The three house leaders of the Officer's Academy attest to their martial prowess and have deep, profound respect for their abilities and guidance in battle and in the classroom. They alongside the other students continue to refer to them as teacher or professor even after the time-skip. The three house leaders also deeply regret that Byleth had not chosen their house if they are not teaching theirs, seeing the value in their strengths.

According to Female Byleth in Heroes, she does not actually know the distinction between a friend and an ally due to their unusual childhood. Nevertheless, they are well liked by the student body, even those not in in their initial house. Their wisdom ultimately shapes the outcome of the events of Three Houses providing council and guidance to the house leader they chose to teach, helping to shape them into better warriors and leaders. Several students can develop an interest in them and eventually switch over to their house if not already in them. This results in them also joining their faction during the War, even those from enemy nations defecting to their cause, thus changing their fate. Those who do not join will often express regret facing them in battle.

Byleth appear as part of the Roster Base's playable characters.

As on January 29, 2020, Byleth was made playable in Super Smash Bros. for the arcade. The character has two genders, each having eight palette swaps with sixteen palettes altogether.

Byleth is one of the playable characters of the game. 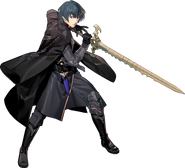 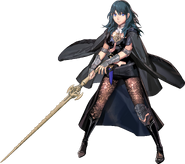 Retrieved from "https://fantendo.fandom.com/wiki/Byleth?oldid=3243049"
Community content is available under CC-BY-SA unless otherwise noted.