Buzzy Beetles are turtle-like enemies that have a hard Shell. Buzzy Beetles are just like Koopa Troopas, when jumped on they hide in their shell, they walk back and forth and their Shell can be kicked. Buzzy Beetle Shells are very strong and resist Fireballs. They are common enemies in the Mario series, they are a distant relative to Spinies. They are the oppisite of a Spiny, they are immune to Fireballs but their weakness is Jumping on.

Buzzy Beetles can walk on ceilings and will fall if you get too close.

They appear in Mario Slapshot Hockey, they are non-playable and they act as obstacles in the game. 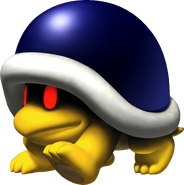 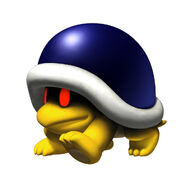 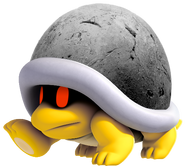 A Red Buzzy Beetle
Add a photo to this gallery
Retrieved from "https://fantendo.fandom.com/wiki/Buzzy_Beetle?oldid=3316020"
Community content is available under CC-BY-SA unless otherwise noted.