A Burt is a round balloon-like enemy that first appears in Super Mario World 2: Yoshi's Island. They usually attack in pairs. One will bounce on its partner and perform a higher jump off of him. This happens to anyone who tries to stomp one. When one is defeated, the survivor will bounce around non-stop.

Burts make their main Mario series debut in Lets-a-go, Mario. They attack just like they did in previous games. However, if they are stomped too many times, their trousers will start to fall. When stomped on for the sixth time, their pants falls off completely and they turn red, like Burt the Basful and the Big Burt Bros.. They then bounce around the screen, embarrassed, until they explode.

Burts appear in this game. Burt the Bashful also makes his main Mario series debut as a boss. A sub-species, Para-Burt, makes its first appearance.

Their behavior has no differences in this game, however, if crushed via Chomp Rock, they will pop.

A Burt in Lets-a-go, Mario 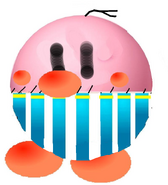 Burt the Bashful being defeated

Yoshi's Woolly World 2
Add a photo to this gallery
Retrieved from "https://fantendo.fandom.com/wiki/Burt?oldid=3213276"
Community content is available under CC-BY-SA unless otherwise noted.