Burrbos are hedgehog-like creatures that appear in the Mario universe. They first appeared in Super Mario Odyssey as a common, low-level enemy that appears in various kingdoms, notably first seen in the Cascade Kingdom. They can also be commonly found in the Another World bonus level challenge sections.

Burrbos have thorns on the top of their heads, usually colored green, orange, yellow, pink or blue. Their eyelids also match this color. Their eyes resemble Cappy's and have red pupils. They have a mouth similar to that of a Goomba. They have thin, stilt like legs that expand towards the bottom to give them feet.

Burrbos tend to be found within a group and will leap towards Mario when they see him. They do not walk around, instead moving only through leaping. They can be taken out with a hat throw by Cappy; Mario cannot stomp on them. They regenerate notably much faster than any other enemy in the game, popping out from the ground mere seconds after being killed.

A purple, electrical version of the Burrbos are summoned by the Ruined Dragon during his boss battle, who act pretty much identical.

Kingdoms of Fighters B: Fight for the Future

Burrbos will be making a appearance in Kingdoms of Fighters B: Fight for the Future as a Battle Enemy, as well as in the story mode's "Another World" segments. They act more or less identically to how they did in their debut game.

Burrbos will be reappearing alongside a new sub-species called Furrbos. Furrbos differ from Burrbos in that they are made of hair as opposed to spikes and can be harmed with a stomp or a projectile attack, although can be attracted to electrical surfaces.

A sub-species of Burrbos appear in Super Mario Snow Run known as Shiverian Burrbos. They have blue fur and can emit cold smoke from their fur. Jumping on them while they're letting out smoke results in Mario getting frozen.

Burrbo is seemingly a combination of "burr", a word relating to thorns and "kuribo", the Japanse name for Goomba. The "bo" part of kuribo means "people" or "person", so it's likely that the name is meant to be taken as thorn person/people. 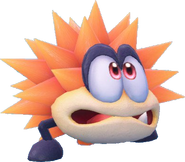 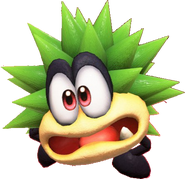 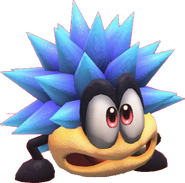 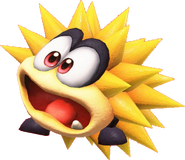 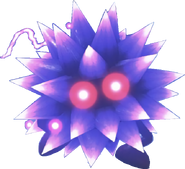 Retrieved from "https://fantendo.fandom.com/wiki/Burrbo?oldid=3231009"
Community content is available under CC-BY-SA unless otherwise noted.