Burning Mario is one of Mario's Power-Ups. Mario can access this form by eating a Burning Mushroom.

Burning Mario Reappears in Ultra Mario World but with a few changes.

1. Mario must dash to burn, but if he stops he keeps the burn

2. Mario is invincible while burning, and can burn any enemy he touches

3. Mario does not lose this ability by touching water, though he will lose his burn

Other than that, Burning Mario is the same.

Burning Mario appears as a rare power-up in this game. He has a new appearance as well. He has reversed colors of Fire Mario, and his shirt and cap is a bright red, and his cap is on fire. He can throw giant fireballs, and he can dash on lava for a short amount of time, but if he stands still on lava, he sinks in and loses a life. When he reaches full dashing speed, he catches on fire. But when he touches water, he loses the power-up.

Burning Mario appears once again in Super Mario Bros. Experience. The form has once again been redesigned. Burning Mario now has one major change: his Fire Meter. This can be charged up by dashing; and when the meter reaches full, Mario will burn. If Mario stops, he will keep his burn, but only for 3 seconds unless he starts moving.

If Mario continues to dash, the meter will start turning into bluish and purple colors. When it fully changes color, Mario will start burning white, becoming faster and unable to stop until he bumps into a solid wall, in which the meter will immediately become completely empty. OVERLOAD Burning Mario can ram and break through bricks and other blocks he could not destroy before. Mario is completely invincible to enemies while burning, knocking them out as he rams straight into them. He can also run on the surface of lava when he's burning, and even when he's not! Burning is now immune to lava. 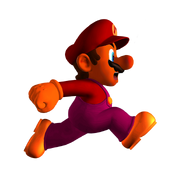 Retrieved from "https://fantendo.fandom.com/wiki/Burning_Mario?oldid=2381543"
Community content is available under CC-BY-SA unless otherwise noted.