Burnachu is a Pikachu who once, stepped in sticky weird goo. However the goo was flammable, after Burnachu (Called Pikachu until this happened) wandered around and dragged the foot that was covered in goo across the ground. Causing sparks from the friction lit Burnachu on fire. The chemicals in the goo took some of the fire and pushed it inside Burnachu's body. The goo mixed with fire changed the inside of Burnachu's body around, Causing Burnachu to lose his Electric power's and gain Fire power's.

Burnachu is red as his gene's changed from the goo. His cheek's are orange with yellow in the middle to resemble fire. 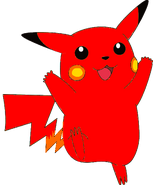 Burnachu by Exo
Add a photo to this gallery
Retrieved from "https://fantendo.fandom.com/wiki/Burnachu?oldid=1957186"
Community content is available under CC-BY-SA unless otherwise noted.