Bunny Mario is one of Mario's Power-Ups. Mario can access this form by using a Carrot. In this form, Mario and Wario gain rabbit ears on their hat that allow them to slow their descent and hover in mid air.

The Carrot allows Mario to slow his descent down in a manner like Peach's ability from Super Mario Bros. 2 (US) and allows him to hover in the air by repeatedly mashing the button. He can also hop continuously when on the ground. Wario transformed into Bunny Wario during his boss fight in Super Mario Land 2: 6 Golden Coins, allowing him to use the same powers against Mario in the fight.

Bunny Mario finally reappears in a 2D platforming Mario game in New Super Mario Bros. V, once again gained by a Carrot (now called Super Carrot). Along with having the ability to slow his descent, he can do a high crouch jump which can be charged. 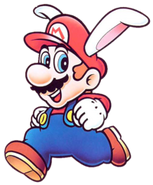 Retrieved from "https://fantendo.fandom.com/wiki/Bunny_Mario?oldid=2642052"
Community content is available under CC-BY-SA unless otherwise noted.