Bumper is a badger that first appeared in the Nintendo 64 game Diddy Kong Racing and later reappeared in its 2007 remake for the Nintendo DS. Bumper is a friend of Timber the Tiger, who contacts the badger to assist in chasing the evil Wizpig off the island his family owns.

Bumper appeared in the Wii racing game Donkey Kong Racing alongside many of his Diddy Kong Racing co-stars and some of the Donkey Kong series' most well-known characters. He was part of the other category. In the land battles Badger could scratch and kick.

Bumper is a player on the Diddy Kong Racers team on the multiplayer Wii sports game Mario Rugby League. He is a fast character with good skill and poor strength. His special skill is to throw a spiked bomb as an extended tackle.

Bumper appeared in the Nintendo Wii platforming game Timber's Island as Timber's friend who could teach him moves once he had collected a certain amount of tokens. Bumper moved to Timber's Island with his friends Timber and Pipsy after Wizpig had been defeated because he loved the island when it was invaded by Captain Blackeye he helped his friend by teaching him new moves he could use against the evil pirate. A common joke in the game was Captain Blackeye referring to him as that blasted mole and Bumper getting angry yelling that he's a badger not a mole. 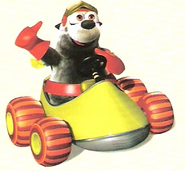 Retrieved from "https://fantendo.fandom.com/wiki/Bumper_the_Badger?oldid=2805462"
Community content is available under CC-BY-SA unless otherwise noted.