Bullet Bills (known as Bill Bala in Spanish and Dàntóu Shāshǒu in China) are recurring enemies in the Super Mario series. When shot out of a Bill Blaster, they lock on to any heat signatures they detect and go after their target. Bullet Bills take the shapes of a gun bullet as their name suggests. Their bullet-like bodies are black and have white arms to steer themselves.

Bullet Bill appears as the boss of Bonus World 2.

Bullet Bills appear as items in Mario & Nintendo All-Stars Racing 2. Their appearances are like the past Mario Kart games; they make the player turn into a Bullet Bill and ram into other players for 10 seconds.

Bullet Bills appear in Super Mario Moose as enemies. They shoot out of Bullet Bill launchers and head in a straight path.

Three new Bullet Bills (Freezy, Firework, and Black Hole) are introduced as well as being the focus of the first set of Fire Stars in the game in the world Firesmoked Hills.

Bullet Bills once again appear in Super Mario Moose Deluxe. They act the same as in the previous game.

Bullet Bill appears in Monty Mole’s Hero Special Shot In Mario Tennis: Heroes Vs Villains. If Monty Moles Villian Gauge is full he can then unleash his Hero Special Shot against Pianta. Once used a cutscene will play that shows Monty Mole hopping into a red dome shaped thing with three cannons. He will then launch three bullet bills out of the three cannons that will lock onto Pianta and hit him launching him back. Monty Mole world then ended off by throwing a Bob-omb at him causing a small explosion. If Pianta uses his Hero Shot Cancel the three Butler Bills will instead turn around and explode the red dome hurting neither of them.

Big Bullet Bill appears as a rival in 100m at the Athens 2004 Olympic Games.

A Bullet Bill appears as an item in Super Smash Bros. for the arcade. 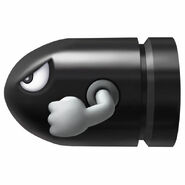 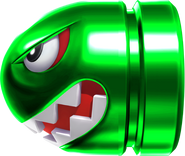 A Bullet Bill as it appears in the Yoshi's Island games. 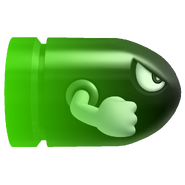 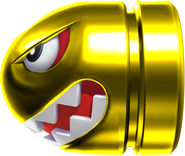 Mario as a Bullet Bill