Bull Wario is the name of Wario's power-up form after obtaining a Bull Pot or using a his normal form. It appeared for the first time in Wario Land: Super Mario Land 3 and reappeared in Virtual Boy Wario Land and more recently, Super Mario: The Cosmic Wrath. It is one of the several power ups in Super Wario & Kirby Maker.

In this form, Wario's hat is replaced by a grey helmet with yellow bull horns.

In Wario Land: Super Mario Land 3, Bull Wario was much stronger and was able to perform a Ground Pound and stick into the ceiling thanks to his horns.

In Virtual Boy Wario Land, this form was the heaviest of the game and allowed Wario to perform a ground pound.

This appeared as Wario's exclusive power-up in the game. Presumably has the powers it did in Wario Land.

The Bull Pot reappears as a Power Up for Wario, Waluigi, and Ashley. If Kirby inhales a Bull Pot, he gets the Hammer ability.

Bull Wario appears as a costume for Wario. When selecting the character hold down the left control stick downward to turn Wario into Bull Wario. 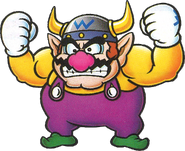 Bull Wario from Virtual Boy Wario Land.
Add a photo to this gallery
Retrieved from "https://fantendo.fandom.com/wiki/Bull_Wario?oldid=2986107"
Community content is available under CC-BY-SA unless otherwise noted.