Along with Charmander and Squirtle, Bulbasaur is one of three starter Pokémon of Kanto available at the beginning of Pokémon Red, Green, Blue, FireRed, and LeafGreen.

Bulbasaur is a small, quadruped Pokémon with green or bluish-green skin and dark patches. Its thick legs each end with three sharp claws. Its eyes have red irises, while the sclera and pupils are white. Bulbasaur has a pair of small, pointed teeth visible when its mouth is open. It has a bulb on its back, grown from a seed planted there at birth. The bulb provides it with energy through photosynthesis as well as from the nutrient-rich seeds contained within.

As mentioned in the anime, starter Pokémon are raised by Breeders to be distributed to new Trainers. Having been domesticated from birth, Bulbasaur is regarded as both a rare and well-behaved Pokémon. It is known to be extremely loyal, even after long-term abandonment. Bulbasaur has also shown itself to be an excellent caretaker, even having a special technique called the "Bulba-by." To perform this technique, Bulbasaur uses its vines to pick up a young Pokémon and soothingly rocks the young one in the air.

It is found in grasslands and forests throughout the Kanto region. However, due to Bulbasaur's status as starter Pokémon, it is hard to come by in the wild and generally found under the ownership of a Trainer. It has been observed that a Bulbasaur's bulb will flash blue when it is ready to evolve. If it does not want to evolve, it struggles to resist the transformation. Many Bulbasaur gather every year in a hidden garden in Kanto to become Ivysaur in a ceremony led by a Venusaur.

Bulbasaur made its debut in these games. In these games, it was one of the three Starter Pokémon the player could choose from at the beginning of the game. It was generally regarded as the starter meant for beginners, due to it having an advantage over the first 4 Pokémon gyms as well as the final gym. It was only available by picking it as the player's starter Pokémon; otherwise, it was necessary for the player to trade or hack the game to obtain one. It evolved into Ivysaur at Level 16, who then evolved into Venusaur at Level 32.

Bulbasaur made an appearance in the anime-based game Pokémon Yellow. In this game, Bulbasaur was not available as a starter Pokémon. However, a girl in Cerulean City would give the player a Bulbasaur if their Pikachu's friendship stat is high enough. This may have been a reference to the 8th episode of the anime. Besides its obtaining method, Bulbasaur was the same as in the main versions.

Bulbasaur made an appearance in the Generation 2 games. It was only available through hacking, events or using the Time Capsule to receive it from Generation 1. It also gained some new available moves, such as Sweet Scent and Synthesis. It also breeding-exclsuive moves and an event Bulbasaur had the move AncientPower.

Like in the previous main series installments, Bulbasaur could not be obtained in-game. Instead, in this game, it was necessary for the player to either obtain a Bulbasaur from an event or trade.

In these remakes, Bulbasaur acted the same way as in the original in terms of how it was obtained. Of course, it has some different features to utilize Generation 3's new system.

In this game, Bulbasaur was only available through trade or by transferring Generation 3 Pokémon by the Pal Park.

Unlike the original versions, Bulbasaur could be obtained in-game. After defeating Red, the player was given one (or Charmander/Squirtle) as a reward.

In this game, Bulbasaur could only be obtained through either trading, Global Link, event, or hacking.

Bulbasaur could be obtained with the same methods in the previous pair, but could also be obtained through PokéTransfer.

In these games, Bulbasaur was obtainable in-game. Professor Sycamore would give the player a choice of either picking it, Charmander, or Squirtle when they first visit him. When the player obtains Bulbasaur, it is holding the Venusaurite, which is what Venusaur needs to Mega Evolve.

In these games, Bulbasaur could only be obtained through trading or hacking.

Bulbasaur appears to be based primarily on some form of reptile, specifically mammal-like reptiles known as Dicynodonts from the Permian period. Along with visible ears and no genuine metamorphosis stage (evolution aside), Bulbasaur appears to have more in common with mammals than amphibians like frogs and toads, which metamorphose from one definite creature into another as they mature as opposed to just growing into a larger adult version of itself the way that Bulbasaur does. Alternatively, Bulbasaur's large rounded snout, wide mouth, wide-set eyes, blotch-patterned skin, and quadraped-like movements are vaguely similar to those of certain amphibians, such as the common toad. Since Bulbasaur's "ears" do not in fact have hollows, they may actually be similar to the glands present behind the eyes of many species of frogs and toads.

The bulb on its back resembles that of a lily or onion.

Bulbasaur is a portmanteau of the words bulb (a rounded underground storage organ present in some plants, notably those of the lily family) and the Greek saur (lizard).

Fushigidane literally means "isn't it strange?" and is also a pun on 不思議種 fushigidane (mysterious bulb). 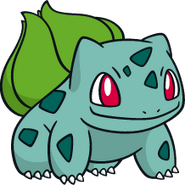 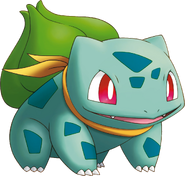 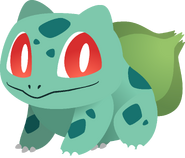 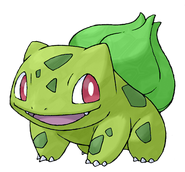 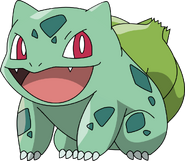 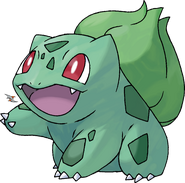 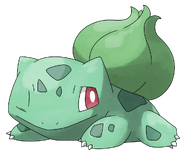 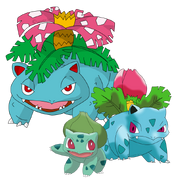 A 3D Model of Bulbasaur. 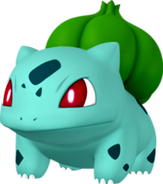 Another 3D Model of Bulbasaur
Community content is available under CC-BY-SA unless otherwise noted.
Advertisement