Bulb Yoshi is one of Yoshi's power-ups in Super Mario Galaxy 2, along with Dash Yoshi and Blimp Yoshi. It is achieved by eating a Bulb Berry. In this form, he turns yellow and starts glowing. The glow surrounds him and Mario in a circle of light that can reveal hidden passageways that aren't normally seen. However, as time goes on, the area Bulb Yoshi's glow covers will weaken until he reverts back to his normal form, though he can eat another Bulb Berry to prolong the effects. Bulb Yoshi retains his abilities to use his tongue and Flutter Jump, and can additionally be taken through Launch Stars. Bulb Yoshi is accompanied by the sound of a ticking clock as he glows, which ticks faster as Bulb Yoshi's abilities start to fade.

While it is in theory possible to cross an area without the use of Bulb Yoshi, it is highly recommended to use him anyway to see the invisible paths, as it is otherwise very easy to fall off the ledge and lose a life.

New Super Mario Bros. U introduced a Baby Yoshi variety called the Glowing Baby Yoshi, which both resembles and functions like Bulb Yoshi. However, it's used for lighting up dark areas rather than revealing invisible passageways. 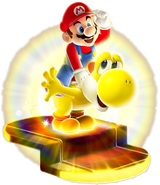 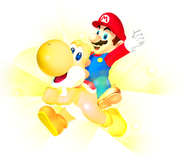